Andy Warhol would be proud 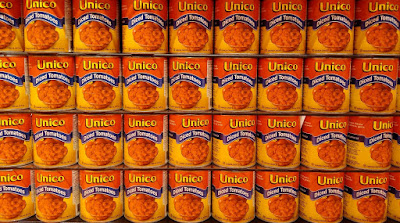 Somewhere in the back of the local grocery store - blessedly renamed Loblaws after an earlier rebranding removed the s - there's an employee who deserves a high-five or two for taking the time to ensure the labels in this display of cans are perfectly and consistently aligned.
Does a stack of cans like this bring us world peace? Or does it somehow compensate for all the nastiness that washes over our planet every day? Not even remotely. But this isn't about fixing the planet or the people on it. It's a small act in a small place by a single person that reminds us of the need to start with an individual act.
Sure, it's all part of the job. And it doesn't make the contents taste any better, either. But it is nevertheless a job well done. And we need as much of that as we can possibly get. Bon appetit!
Your turn: A small example of excellence is...?
Posted by carmilevy at 5/31/2015 12:49:00 PM 3 comments:

On making today yours

"Either you run the day, or the day runs you."
Jim Rohn

Your turn: How will you make today yours?

I'll never get tired of perspective-type views down long hallways or pathways. This particular one may seem to be more Soviet-era drab than most, but it serves as a reminder that not all parts of the journey will be perfect.

And lovely or not, it's how we choose to hold our heads up along the way that determines how successful we'll ultimately be as we pass through them.

I'm going to keep this in mind as I set off on the workweek that will be, and I hope you consider doing the same. Enjoy...

Where I speak to college grads...

I'll admit I lead a bit of a surreal life. Married to a woman I probably don't deserve. With kids any parent would be proud of. And pursuing a career that often has me pinching myself that I get to do what I do.

Add another one of those moments to the list, because I've been asked by Fanshawe College to deliver a speech to the students in its IT program at this spring's graduation ceremony.

It's humbling to be asked, because speaking to graduating students as they get ready to close off one chapter and begin another - probably the most significant life-related inflection point any of them has had up until that point - is an incalculably huge honour, and I'm already feeling the responsibility of ensuring every single word I say resonates with them. Lots of weight there.

Graduation speeches have long been powerful venues for established leaders - captains of industry like Steve Jobs, world leaders like Bill Clinton, even entertainment figures as diverse as Robert DeNiro and Jim Carrey - and I often find myself studying their narratives for clues to inform my own writing and speaking.

Some of their best quotations come from these speeches, and I feel the need to ensure my own words measure up. So I've been waking up at 2 a.m. most nights, my mind racing with ideas about what will stick in their minds most profoundly. I grab my smartphone and jam my ideas in before they're lost to time, then drift back to sleep for a bit. Sometimes my scribblings make sense in the brightening light of morning, and sometimes not.

But come June 18th, I'll have between 5 and 7 minutes to chat with a few hundred folks whose lives are about to take them on adventures that not so long ago awaited me as I nervously fidgeted with my own graduation cap and gown. And I hope I can come up with the right words.

Keeping pace on the treadmill

The scene: It's 7:40 a.m. in the parking garage. I've just locked the car and am walking, quickly, to the exit. My office phone six storeys above my head is scheduled to ring at 7:45, at which point I'll be talking tech with a couple of radio hosts in a faraway city. I'm so worried about the time that I don't slow down to take this shot. I know it's going to be blurry, but I don't have the time to care. Silly, I know.

While I normally like to get into the office early enough that I can settle in and get ready for the day, I was rather slow getting out of the house today. Couple that with a bit of uncharacteristically early traffic and I ended up cutting it closer than usual. I know journalists like to do things on deadline, but this by-the-second existence can be a bit much.

Your turn: What's the one change you'll make to improve your life?

She chases the sun

Our daughter came bounding down the stairs earlier tonight and headed for the rear patio door. The dog had been fed, had been let out, then let back inside, and he had gotten his needle, so it wasn't immediately clear to me what the rush was all about.

But the sky was glowing something akin to salmon, pink or soft-orange, the kind of near-sunset that almost begs for a little extra attention. And she needed to grab the picture while the magic was still happening.

She quickly explained what she was up to before stepping outside and raising her lens to the sky. I watched from afar as she composed the scene and tried to commit the moment to memorable pixels.

On treasuring your next hour

"A man who dares to waste one hour of time has not discovered the value of life."
Charles Darwin

Take the time to stare

I woke up early this morning and stared at the dog. He sleeps at the foot of our bed, and while I'm sure dog behaviorists are probably cringing at this fact, his being there, where my toes can feel him and where I can hear his little Schnauzer-ish snorting at various points through the night, makes me feel just a little bit better about the world. He's accepted us as his family, and I kinda like having him close by.

So in the still-dim light of the gathering dawn, I watched his ears subconsciously twitch to the sound of a single bird in the bank of trees across the street, and wondered what he was dreaming about. It seemed like one of those moments worthy of a mental snapshot, if only because they don't happen as often as we'd like, and because they seem to disappear into history almost as quickly as they first present themselves.

I don't do this early-morning observation thing nearly as often as I should. If I'm up early - which is ridiculously often of late, as evidenced by this tweet, this one and, oh yes, this one - I'm usually in motion before my feet hit the ground. These pre-dawn workfests usually involve furtive writing sessions in the kitchen, darkened drives to a deserted parking structure downtown, and interviews on-camera or by phone with not-so-random media folks across the country. Which doesn't leave a lot of time to slow down and pet the dog while he snoozes. Or just stare at him as I did this morning.

I really need to change that. Because things have been brutally busy lately. And as a result I've had a lot of early-morning wakeups over these past couple of weeks - hence the relative silence here on the blog - and not enough moments where I slowed things down enough to appreciate the moment. I love this media-centric, tech-filled brand/career/life that I've built for myself and my family, but sometimes I think I need to hold onto the day-to-day of it all a little more tightly.

Because someday we all run out of moments. And I'd hate to think we didn't grab them while we had the opportunity.

On knowing how much a moment is worth

‎"Sometimes you will never know the value of a moment until it becomes a memory."
Dr. Seuss
Or sometimes you never take the time to figure it out at all.
So take the time.
Posted by carmilevy at 5/09/2015 06:04:00 PM 2 comments:

On learning where happiness comes from

The universe has a funny way of teaching us who's in control. Assuming we can dictate the outcome is either amusing or tragic, depending on your perspective.

When beans refuse to sing

‎I tried so very hard to hear the medley. I cupped my ear to the can and listened as intently as I could.

Alas, no music at all.

"Be nice to everyone. You never know when your paths will cross again."
Sarah Warren

I find it rather shocking how many folks on this planet seem to misunderstand - or completely ignore - this very simple, basic truth. It's sad, really, as life would be a lot less stressful for all of us if people simply tried harder to be kind.