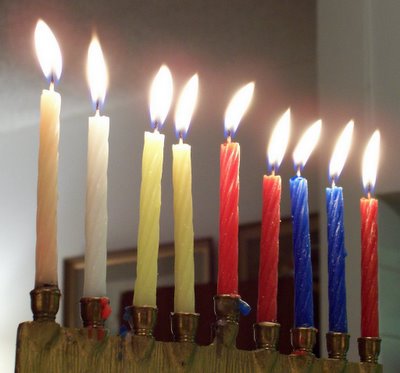 I was flattered to be asked to submit a piece to my paper this year outlining what it's like for a family with young kids to celebrate Chanukah. Being a part of a minority group has helped shape who I am and how I write, so I was glad to have a crack at this topic.

The resulting piece, The puzzle of passing down faith, (see below for full text) was published in The London Free Press on December 24th, 2005. Since today is the last day of Chanukah, and we lit all eight candles last night, I thought it might be nice to introduce it now for some post-holiday perspective. I hope you enjoy the read.

Your turn: Whatever your traditions are, how do you ensure your kids learn about them and carry them on? In this day of ubiquitous media and stressed family bonds, how do parents ensure continuity?

The puzzle of passing down faith
London Free Press
December 24, 2005
By Carmi Levy

My late grandfather loved to celebrate Jewish holidays, because he got to watch his beloved grandchildren sing their hearts out and be themselves. Although he immersed himself in our lives pretty much every time he visited, holidays always meant more.

I didn't begin to understand this immense power of tradition until I hit adulthood and had kids of my own.

Growing up Jewish isn't easy in a world that seems so ill at ease with religious recognition that even a simple Christmas greeting is fraught with controversy. Yet tradition is often all we have to hold onto when our increasingly secularized world makes it so easy to forget who we are and where we come from.

In my family, holidays have always been our cultural root system. They function as milestones in our efforts to reinforce to our kids that their heritage is important, that our history has brought with it certain obligations to not simply survive, but to live full lives and to give back to the community that has nurtured them.

But even Jewish holidays have a pecking order in the eyes of a child, and few holidays are as treasured as Hanukkah.

My mom wasn't much of a cook most of the time, but Hanukkah somehow transformed her. Dog-eared index cards with carefully written recipes suddenly appeared in her kitchen. Delicious smells filled the house and embedded themselves into our clothes. Even on the coldest winter nights, the warmth was almost tangible.

Hanukkah always ranked as my favourite. Meant to commemorate the miraculous victory of a small band of Jewish fighters against an overwhelmingly powerful force of Syrian Greeks, the story of the holiday fit nicely with my view of the world.

You always rooted for the underdog, because it was the morally right thing to do.

I grew up knowing that I was part of a small group that can never afford to take its existence for granted. Like the heroic Maccabee fighters we remember on Hanukkah, today's Jews must survive and thrive within a much larger, colder context.

Hanukkah was the one holiday when I didn't feel like a little kid in an adults-only world. I knew all the songs. I could eat the fried potato pancakes -- latkes -- until I was sick and no one would scold me. I could light my own candles and stare at them until they burned out. I could feel what it was like to have everything I wanted and be surrounded by the people who mattered most.

Now it falls to me and my wife to do the same for our kids. The same scenes, sounds and smells of ancient traditions now play out in our home much as they did in our parents' homes. We get to watch the wonder through their eyes as we quietly hope we've done enough to plant strong Jewish roots in them.

Admittedly, modern society has commercialized our holiday to a certain extent. We buy our kids Hanukkah gifts. Like parents of any religion, we struggle to keep the focus on the holiday and not the hype. But all that pales when they stand on tiptoes to help us light the candles.

Hanukkah is the Jewish Festival of Light, and nowhere does it hit home more as we help our kids carefully light their candles, then watch the warm glow reflect off of their curious faces.

There's poetry in the timing of Hanukkah this year. Starting a mere three days after the shortest day of the year, Hanukkah's light cuts through the gloom and gives us all something joyous to celebrate.

Some of my late grandfather's greatest joys were derived from watching us revel in the magic of Hanukkah, of being kids at a time that held so much promise and hope, not only for their future, but for their Jewish future. It's what my wife and I hope our kids hand down to their own children someday.

Carmi Levy is a London freelance writer.
His column appears every other Wednesday.

Although I can't really answer some of your questions - I have no children of my own - I enjoy your perspectives. I hope your family had a wonderful Chanukah and new year!

That was a touching post Carmi. Happy Chanukah to you and your family.

It's no different at our house...we try to make lasting memories by repeating traditions carried down throughout the years and families, in addition to creating new ones for our own new family.

Perhaps I'm naive, but I like to think that as parents we still have the greatest influence over our children unless we elect to surrender it. The challenge, I'm sure, will come when my children are older and gleaning more from the world around them, yet I know from my own upbringing that a strong base can hold up under loads of pressure.

My three year old is at a crossroads now. The peer pressure is starting, albeit nothing at all like what he'll face at, oh, say 13 for a little numerical alliteration. At the end of the day, though, it's what he learns at home that means the most to him. We make the choice to be actively invovled in his life - to understand his interests, to take interest in who his friends are at school and what he does while he's not with us. We talk to him about the things we believe in. We attend church weekly where he's enrolled in a Sunday School class. We take him with us when we volunteer at various places. We read to him nightly - both your normal run-of-the-mill kid books and faith related kid books. We don't shy away from what we don't believe in or don't like when he's with us. If he's exposed to it we don't panic. We explain why we don't believe similarly or don't agree with the practice.

When I was in college I sat on many a student life panel at each Open House held for prospective students. Nearly every panel heard the same questions from different sets of parents. Typically an overwrought father of a young 17 year old girl would express concern about the co-ed dorms and/or the open policy about over-night guests in the dorm rooms. And each time it'd come up, my friend Joe would nod polietly and say in his kindness "adressing the grown-ups" voice, "Sir, I understand your concern. But honestly, your daughter will be 18 years old. If you did a good job laying a good foundation for her these last 18 years, you've got nothing to worry about."

I think for a college kid, Joe was awfully wise.

By the way, great article.

What a wonderful article, Carmi. I think, as parents, we want our children to feel what we felt (and more) when we were kids. To take the time and share our memories of our families - of the people they never got to meet, but who meant so very much to us, the ones who formed a portion of who we are. And, to instill a sense of importance of our faiths and families.

Carmi, what a beautiful article that really put so much into perspective. Your kids are so lucky to have a dad that cares so much about tradition, something that is sadly lacking in our culture.

We have small traditions that aren't really religious-based. Mostly just doing the same things on the same days. Now the kids are old enough to remind us how it should be done. I love that.

Haven't seen you around Michele's lately, but somebody today said that she owes you a beer. Perhaps you were her 100,000th visitor?

As far as our religious traditions go, continuity isn't much of a problem for us. My husband is a minister. It's his full-time job. But hopefully, my kids won't be so burned out on all things church-related (or become so cynical) that they will reject the traditions of our faith once they're adults. It'll be their choice, though.

Beautiful piece, Carmi...absolutely loved it. How do I ensure that my son will continue on with the values/beliefs/traditions I've instilled in him? Well, I would say consistency. Above all else, remaining constant in what we say, what we do, how we share and celebrate our faith and belief system. I try desperately to remain true in my words and actions....for I know that he is watching. I know he's listening even when I think it may not be a big deal. I know he is paying attention to underlying tones and conversations even if I think he's busy with his Legos. He's a sponge soaking up whatever I pour his way....by choosing to be consistent I am confident he'll at least respect where I am coming from as a parent. Maybe not now. Maybe not in 5 years. But someday, and that's good enough for me.

Carmi, What's the correct spelling... Chanukah or Hanukkah? I used the word in my post today and spelled it the second way. Is that wrong?

We lit an advent candle when my kids were young each Sunday leading up to Christmas. I love the symbol of lighted candles and bringing light back after the darkest day of the year.

As always - you're writing touched me. Thank you.

Sounds like you had a great Hannakah, Carmi. We celebrate it, too.

My only, an 8-year old, loves Chanukah and Christmas fairly equally. We call it Chanumas. At first I was disappointed about the timing this year, knowing that it would be a challenge for Chanukah to not get totally overshadowed, but alas, all it took was a little effort from my wife and I to integrate, and it worked out surprisingly well.

We had what we eventually called a Travelling Chanukah Show this year. First two nights in Seattle at my father-in-law's house, third night home in Bellingham, fourth and fifth nights in Vancouver, B.C., sixth night at a friend's Chanukah party back in Bellingham, 7th night at home, and 8th night at another friend's house. We brought our own menorah, candles, kepot, dreidles and gelt with us and ate many, many latkes!

When I was a young probationer in a Children's Hospital I nursed a little Jewish boy and became friends with the family and they treated me like an elder daughter and all came to my wedding and the father Maurice made a wonderful impromtu speech. Thank you for reminding me of some dear old friends.
Happy Hanukah!
Michele sends her best.