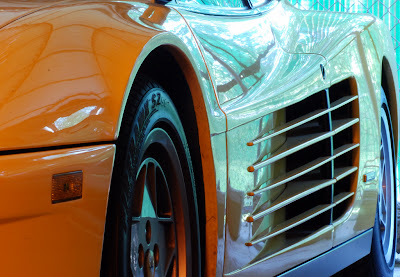 Exotic in the shade
Laval, Quebec, August 2007 [Click to embiggen]

Exotic cars don't really do much for me. I view them as icons of self-indulgence, the kinds of things that overgrown kids with too much money would buy simply because they want everyone else to know that they have too much money. There's an inherent immaturity in having something so outrageous, and I simply can't understand the blatantly look-at-me mindset.

Then again, maybe I'm just jealous of those who can buy these things without batting an eyelash. Perhaps I'd be the first in line if money were no object. Whatever, it's easy to see the aesthetic appeal of a no-compromise design that does one thing exceptionally well. It goes fast. It doesn't carry groceries or kids or go far on a gallon of fuel. There's purity of form in this kind of car that, say, a Toyota Corolla just can't match.

Which means that one can admire something without coveting it. Strange, that.

So when I saw this yellow Ferrari Testarossa (yes, it's similar to the model that Don Johnson drove in the wretched old Miami Vice series) sitting in the deep shade of an enclosed parking garage, I knew I had to take at least one picture of it. But the light was so bad that I needed a tripod if I was going to bring back anything better than a dim, grainy image. So there I found myself one afternoon, setting up my tripod in the middle of the garage, receiving strange looks from passers-by.

Fancy cars? Meh. Cars in general? Double meh. I just can't get into them. They are an environmentally hazardous tool to get you from A to B. But I do like your picture. And I am waaaaay more impressed with the fact that you had the cahounas to bring in a tripod to take this photo, than with any idiot who spends excessive amounts of money on a vehicle.

Rare object I can't stop staring at? My husband, of course. He's priceless.

Cars no...don't get too much into them BUT a hyper child that finally went to sleep....now that I have to double blink because it is a rare object!! LOL

Yes, beautiful indeed!
I tease my boyfriend all the time when he talks about the corvette. I tell him "just wait until we get next to and look closely." He says "what?" I tell him "look at the driver and it will be an older man, going through his midlife crisis." The funny thing is, I have been right about that more times than I have been wrong!

I lobe that picture Carmi...And I don't see any yellow, at all! (lol) That is part of what find so interesting about the picture..All the colors that are visible because of the way the light was...!
The closest I ever came to ownng an exotic car was a USED JAGUAR...I think that particular model which was around for a long, long time was a "Work Of Art" It was beautiful beyond words....but it certainly was not an easy car to keep up..So, it was Bye Bye Jaguar pretty quickly---less than a yesr...But I tell you Carmi, it was a true beauty, and it was not the sports model but the regular seden...in this Milk Chocolate Brown....Beautiful!

Testarossas are old enough now that you can often find one for less than a Cadillac Escalade. And they do more than look exotic: even a 20 year old Testarossa is a very powerful automobile.

I tend to agree with you, but Ferraris are different. Yes, they are status symbols, but they are also beautiful works of art. I don't envy anyone a Porsche, Mercedes, Lexus, Lamborghini. I do envy the Ferrari owner.

When I was a boy, I read about Enzo Ferrari and his racing stable, and I vowed that one day I would own one. I will, one day. It'll be an old, undesirable model, but I will have one.

I knew you couldn't be perfect!

(Btw, I'm drooling over the idea of Acura bringing back the NSX. I'll never get it but yes, I want the status symbol and I'll freely admit it!)

Cars rarely do it for me. They only look good in commercials, where they’re seen breezing on open roads without another vehicle in sight. They just lose something stuck in downtown traffic.

I can't stop staring at the moon when it's up in the sky, full and bright. I dang near drove off the road trying to catch a shot of it with my camera the other night.
It's this huge round ball so close to our planet, and I just can't help but want to stop someone and ask..."isn't that just the strangest thing"? It's so bizarre yet most people don't even pay that much attention to it.

Hi Carmi! You beat me to Moon - hence my early visit although it is actually bed- time. Talking of Moon we have had a spiffing one these last few nights and I can't help staring at that.

I love the colouring you have caught in the photo. How did you do that? Michele sends her best as do I.

Just seen Suzanne's comment. She must be a kindred spirit!

The car, which should be called a Testostarossa, does nothing for me, either.

I can't stop staring at other people's babies (esp. when they're, say, one year old.) Wonder what that means. . .

Meant to comment yesterday, but got distracted. SHOULD be working now, because I spent the day nursing a migraine instead of a deadline....but this image is just so sexy....

That car reminds me of Happy Days, even though Richie had, like, a '57 Chevy. I think Fonzie must have worked on a car like that or something. Whatever. Happy Days ruled.

a perfect wave crashing on the beach...those I could stare at for hours, and in fact, hope to tomorrow night!

I have never been one for makes and models of cars and car shows, etc - but I love how you captured the curves and color and glossiness and sheen in this pic. Do they still make cars with chrome bumpers? Michele says good evening!

Here is my rare object...the angelic face of my daughter when she is asleep...I can't stop staring at it. Trust me it is rare cause when she wakes up, it is a whole different ballgame!

Ah, the Testarossa. I have been in one of these and it was awesome! It epitomises the phrase 'corners' on rails. That is why I would have a sports car if I had the money :)

I love this picture of one. I also love that it is not red!

Michele sent me back!

One of my favorite exotics.

interesting blog, gonna keep coming back to it

At one time I felt like you. Now that I have one, {gift from husband, not brand new} I can understand why folks want one, yearn for one and are proud to drive one. FUN FUN FUN. We are not rich, but our bills are paid, we do not live by credit card, that is key in todays troubled debt filled world. We live within our means. But my Pepper Ah now there's a car I hope to be able to drive for many many years