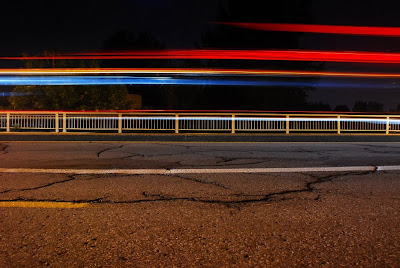 My son and I had come to this spot in the middle of a small bridge over a small tributary of the mighty Riviere-des-prairies, in the shadow of my parents' and in-laws' building. It was the peak night of the Perseids meteor shower. Zach had never seen a meteor shower before, so we figured we had nothing to lose as we headed outside and looked for the widest visible swath of sky.

That was easier said than done, of course, thanks to the thick canopy of trees that smothered the night sky. So as we wandered from one spot to another and finally settled on the bridge as a workable compromise, neither one of us had any great expectations that we'd see anything.

So we were very pleasantly surprised - nay, make that somewhat freaked out - when a bright flash streaked across the sky barely a minute after we settled in on the sidewalk. We looked at each other, stunned, before coming to our senses and doing a high five followed by a happy dance. I'm sure passing motorists and pedestrians thought we were out of our minds, but we didn't care: this was cool stuff.

We sat back and waited for more meteors to appear. The rusted steel railing dug into our backs as we craned our necks skyward and hoped for a repeat celestial performance. I lay down virtually prone on the crumbling sidewalk to reduce the kink in my neck. No dice: the only bright things in the skies from then on came from the never-ending stream of planes on final approach.

We didn't much mind, though. We had seen what we came to see, and we couldn't stop talking about the show, why this stuff happens in the first place, and the physics of it all. Eventually I pulled out my camera and started to fiddle with the controls as we quietly mulled over potential photographic targets. Now, an inconspicuous and old deck bridge in the middle of suburbia may not seem like a worthwhile subject, but we wanted to challenge ourselves to come up with something, anything, to remember what it was like to be there. So we eventually settled on long exposures of passing cars. Their head and tail lights, I surmised, might be neat.

Why am I sharing this? Because I've never been so totally focused on the big moments that I've forgotten about the small ones. When it comes to our kids, I don't think any of this has anything to do with headlines, big bangs or major milestones. I grew up in a house where the small stuff mattered, and as I've been reflecting on how my father related to me at that age - and indeed at all of my ages - I've also been reflecting on how I've been relating to my kids.

Sadly, my father wasn't able to join us on our quest. Toward the end, it hurt him to walk, and his legs were especially troublesome that night. We thought of him as we sat on the sidewalk, wishing quietly that he could have seen it - the meteor, the ghostlike cars, his son and his grandson just being - for himself.

Either way, I see more hanging out on sidewalks in our future.

About this photo: 6 second exposure, f/10, 18mm. No word on what the two motorists who passed in the night were thinking as they watched a couple of strange-looking guys point a tripod-mounted camera at them as they cruised on past. This photo supports our most recent TP theme, open. Click here for more.
Posted by carmilevy at 10/16/2009 05:26:00 PM

This is a great picture....and a really great memory for you and your son. It is important to slow down and focus on these things, because they will be the memories that stick with our kids for a lifetime (sometimes I need to remind myself of this)

Amen. Wonderful post; I so enjoyed sharing the moment.
magic

life is in the details.

thanks for the reminder.

I don't know if I've ever said it out loud, but I should have. This is the kind of thing that makes a father proud. Seeing his values carried forward by the next generation and passed to the one to follow. Not only is this a gleaming example of how you did right by your son, it's an equally brilliant example of how you did right by your dad. And in years to come, Zach will look back at this with the same kind of reverence and warmth that I'm sure you hold for so many similar moments with your own dad.

Oh, and it's a pretty brilliant photo too.

My latest offering in the theme is also something of a photographic experiment, albeit an unintended one. Sometimes I get so anxious when confronted with a suitable target that I forget to make sure I've dialed in the right exposure settings. But sometimes, I think it doesn't matter.

we headed out into the middle of the unlighted wheat fields (foothills of Blue Mtns) south of town to watch the meteor shower.

We pulled into a tractor path into the stubble and were followed immediately by a car - another family who were speaking only spanish.

As the shower turned into a spectacular view -- both groups of people would respond with oohs and awes. There was no need to translate --.

In the end we all clapped our hands and waved in a happy camaraderie. "Adios, Goodbye.."

We never forgot that fun night -- I hope they didn't either.