Leviathans of the sky 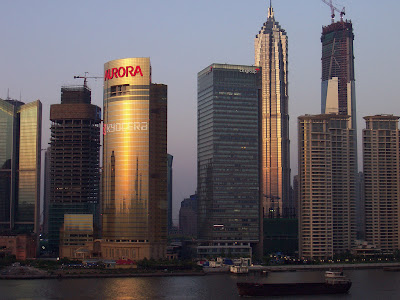 Financial district at dusk
Shanghai, China, May 2007 [Click all images to enlarge]

The skyline is this massive city is almost overwhelming when you first see it. Unlike a typical North American metropolis, whose downtown area is is typified by a dense core of larger buildings that rise out of the less-dense neighborhoods that surround them, Shanghai seems to have endless vistas of tall buildings. But the tallest of the tall can be found here, in the financial district, also known as Lujiazui.

The tall building on the right that is nearing completion is the Shanghai World Financial Center. It will eclipse the nearby Jin Mao Building when it opens in 2008. The Oriental Pearl Tower, not visible in this image, lies to the left of the frame. Interestingly, if you look closely at the Aurora building, you'll notice the Kyocera logo on its gold glass facade. Virtually the entire surface of the building is a video screen, and each night, it runs multimedia ads that reflect across the water and are clearly visible from kilometers away. 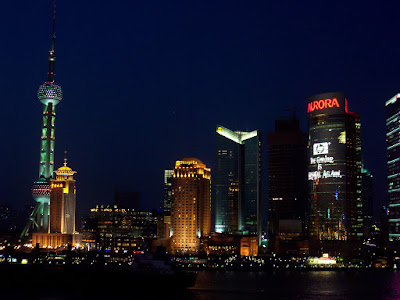 Here's another view of the area, shifted slightly to the left and taken well after the sun had gone down. Notice the HP advertising on the nighttime shot. Its campaign, The Computer Is Personal Again, was apparent in much of the messaging at the Mobility Summit that we were attending. Pretty cool stuff.

All told, these leviathans of the sky paint a picture of this country decidedly different from the stereotypes of old. The China I had heard about as a child is worlds apart from the China that presents itself to me as I stand in awe across the river.

Your turn: You're visiting a place that you had only previously heard of or read about. Does your impression of it now change? How? Why? Feel free to share a personal travel experience.
Posted by carmilevy at 5/26/2007 12:51:00 AM

Lovely photos of a destination I have yet to reach...maybe someday.

I think visiting Mexico always reminds me how lucky I am to live in the USA. The abject poverty, the absence of things I take for granted, the machine-gun-toting dudes on the side of the road, for God's sake!

Well, I found Rome completely different than I expected and yet very much the same. When we go on a trip, my hubby likes to read a lot about the place. I prefer to go there with absolutely no preconceived notions. It's the same approach I use to view movies.

Great pix. Hope you're having a good weekend. Michele sent me!

Great photos. And, I agree. I think of China and see villages. Then I watch TV or see pictures like this and realize it is so much different.

I have enjoyed your posts about your trip!

Just incredible - what a scene.

When I first visited NYC it was with HUGE expectations. When we arrived; although it was a glorious sunny day, we approached the city through depressing suburbs and the Queens Tunnel. It looked dirty and disappointing. Then P nudged me and pointed, I looked up and there was the Chrysler Building gleaming against a blue sky. I fell in love there and then and on that and each subsequent visit the city has surpassed my expectations.

great pictures, weird advertising on a video building! and cities that large make me uncomfortable.
Shalom, friend
( i am entering some photos in a contest, wish me success)

Fabulous photos Carmi. Nothing at all like what I expected it to look like. I've never been out of the country, except Canada. There are several places I would love to visit though, and it will be interesting to see how my preconceived ideas match with reality.

What beautiful buildings.
I live in the country now but grew up in the Boston area, So I miss the city to some extent & always am amazed at how beautiful a city can be in the night with all the lights lit, especially from a distance.
When it comes to travel I'm not as well traveled as I'd like to be.
Going to the places I have been I've rarely set any ideas in my head before going.
I just go ready to experience a new place & try to take it all in.
Here from Micheles.

Cairo in Egypyt was such an experience; all the hustle and bustle. The pyramids were more spectacular than I ever could imagine.

Well certainly your fantastic photos have changed my conception of China. I would never have guessed.
Most of the cities I have visited - Paris , Vienna, New York, New Delhi, Sydney, Vancouver were pretty much as I imagined but I used to do quite a bit of research first. Michele says hi!

I've never been to China, but you're really making me want to visit.

I always read up on places before I go, but that's because I love travel reading anyway and I'm always hungry for a glimpse of what another place would be like for me. I always want to be on the move, and I read about places that I don't know if I'll ever get to but want to know about them anyway.

I've never read about a place and then gone there with preconceived notions, or gone there and been disappointed. It's only someone else's point of view, mine may differ.

I love seeing a country through someone else's eyes.

I haven't got to China yet, but it's somewhere that has always been on my 'maybe' radar.

Hey Carmi, time for a return visit from Michele tonight :-)

hmm - "You're visiting a place that you had only previously heard of or read about. Does your impression of it now change?"

Good question, my friend - especially as I haven't travelled much in the last few years....
Your questions are getting very challenging.....

Is it me, or does the new generation of TV and computers mean that 'what you see is what you get'? Are destinations that much different from what you have seen/read about before travelling?

When I went to Italy recently, I had seen pictures of the site and the camps erected - and the reality was no different from my pre-conceived idea of it - which was actually very comforting!

Venice was wonderful! The best part was this one restaurant that had live music, where the artists approached each table to play a different toon while joking around.

I don't really have any personal travel experiences as I haven't travelled much. I did find that even Sydney seems overwhelmingly large compared to cities in New Zealand (whose downtown area is a very small core). I have heard that Shanghai is the most westernised city in China. We'll be going to the UK later in the year, with a stopover in Singapore, so it will be interesting to see how the real thing matches the perceptions. Here from Michele's.

I love the night shot.

One of my favorite pictures my husband took in Shanghai was of all the skyscrapers and modern buildings with just one very old wooden boat sailing in the water in the front of the frame. It was a stunning photo showing this ancient culture exisiting in a modern world. Quite the contrast!

Why do cities always look so much prettier at night?

When I first got to Israel as a teenager, I was convinced I'd spend every waking moment afraid of a bomb exploding in my face. After about a week, I learned to chill (a little) and I realized that life does, indeed, go on. . . and I spent the next five weeks traipsing around, feeling safe as can be, except for the one time a giant bug in our trailer on a kibbutz tried to eat us all.

Just wanted to say I loved all of your photos of China. Amazing shots and color. As always, you captured it perfectly!

The first time I had that feeling of shaken expectations was when I visited Crete back in the early 80s. I'd read about the Crete of ancient times and I was looking forward to seeing modern Crete from the seat of my bicycle. Weirdly enough, there was virtually no modern Crete. Most of the island back then was little different from hundreds of years ago, and in the small villages perhaps thousands of years ago. I was quite surprised.

Michele sent me over to see modern Shanghai and you, Carmi.

These are two great pictures, Carmi....It is overwhelming---these HUGE HUGE Buildings, and yet...I want to say there is a beauty to them...Es[ecially in that first picture...!

Those shots are fantastic - especially the one of the skyline at night. I always think an urban skyline comes into it's own when it's lit up.

You paint such a great picture of your visit to China with your words and photos that I feel I have experienced a bit of the culture. I am not certain I want to visit though. I have too many issues with the treatment of people and animals.

That night time shot is amazing.

God...the lighting on that first shot is to die for!!

I love night shots like that. It's interesting how invisible the building under construction becomes at night. I can just barely make it out.

Michele sent me over this time.