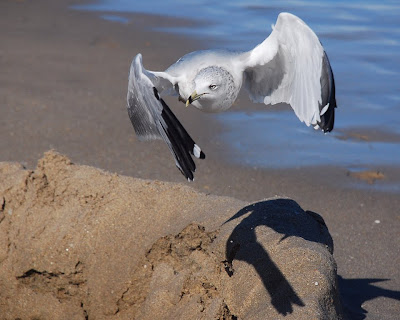 I haven't posted the new Thematic theme because life's been getting in the way. Nothing onerous, mind you. Just a trip to a semi-faraway place and the inevitable upset to life's routine that results. I had pre-posted a bunch of stuff before I left, but in retrospect I probably should have had a few more days worth of content in the pipeline. I guess I'll get to Thematic by the weekend. New theme suggestions welcome.

I've chosen to share a bird photo because flying on planes always makes me wish I had the ability to take to the sky without Air Canada's help. After my flight home last night, where our friendly Dash-8 captain had to reject takeoff after misconfiguring a switch in the cockpit (I tweeted it here, here and here...it was quite the adventure), that wish to be more bird-like became that much stronger in me.

I've chosen this particular bird because he has such a focused look on his face. And in this era of Angry Birds - seriously, everyone was playing it on their phones at the airport - I thought it might be nice to see a real angry bird instead.

I'm just wondering where the pigs are. LOL!!

Nice bird, although he doesn't look that mean....at first when I saw Angry bird I thought of the game, but then a flash came that you were making it our theme! Especially knowing how much you LIKE birds! ...hope things settle down back to your norm! Take care Carmi!

In my opinion naming this bird would be tantamount to naming a cat, it won't come when you call it.
Let's call it Steve, I like Steve.

And no, I'm not getting tired of the birds as of yet. You give us a quality photo then give the viewer an opportunity to feel what the bird is feeling, it is hard to get tired of that.

hmm, as far as the angry bird, I've got a photo of one as well.

I never get tired of taking birdie pics. Although the only recent angry picture I have is Mr. Squirrel
~

that is an awesome action shot.

your framing and composition is very good, but the secret to your photos is the honesty... i will never get sick of your shots!

He looks more suspicious than angry to me.... now, I had a finch that was so angry he had smoke coming out... well, where ever his ears are. But the name that popped into my terribly cramped brain this morning was Philmore. No reason why... just Philmore. As for the cramped brain or brain cramp... depending on how you look at it... does thinking it is Saturday for two hours when it is Friday qualify as officially losing one's mind? Sigh. Funny, I was a little disappointed to find out it is Friday.