Pick a peck of non-pickled peppers 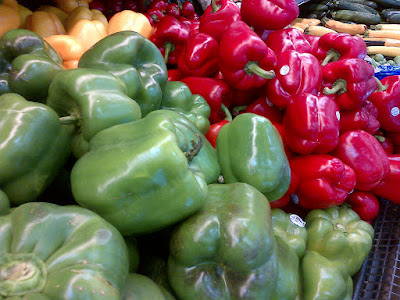 I've gone back to grocery store photography because I apparently won't be satisfied until I'm busted by the Retail Police Force and forcibly removed from store by a couple of baton-wielding retirees.

Once upon a time, I coined the practice "fruitography" because, well, I was shooting fruits. So does this pepper shot qualify as "vegotography"? What about Loblawsography or Sobeysography in honor of the two major grocery store retailers around here? Does it really matter what it's called?

I'm guessing the only thing that matters is that this kind of spontaneous shooting presents yet another opportunity to stretch the bounds of photography. And life. Because that's why we do these artistic things in the first place, right?
Posted by carmilevy at 9/24/2011 03:37:00 PM

Too funny Carmi! Maybe we need a theme of "getting caught!" Just kidding, but the image of you or anyone really being removed from taking pictures is you must agree a very funny to witness or see! But officer/or store-good-guy... please, really! lol