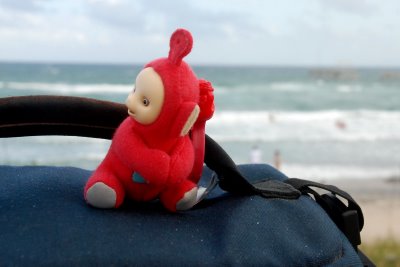 I need your help naming this image
Lake Worth, Florida, December 2007

This is Po. She spends her life hooked onto the strap of my old camera bag, and I take pictures of her wherever she goes. Here, she enjoys some time in the sun. For the uninitiated, she's a Teletubby, one of those annoying gibberish-speaking, freakish-dancing British imports with televisions in their tummies.

For the record, I've never been a Teletubby fan. I believe they are responsible for delayed potty training, excessive crayon-drawing on walls, and a decided lack of vegetable-eating among the post-toddler set. I think they have also touched off epileptic seizures in vulnerable TV-watching dogs, but I'm waiting for the research results on that one.

And for this reason, I'm not sure what caption this image should carry. Any thoughts? If so, read on...
And last week's winner? I couldn't pick just one, so I decided not to limit myself. Here's the short-list:

The Moon Shines
In Daylight
Upon the Strings
That bind humanity

They're all winners in my book. As are you for participating and turning Caption This into a weekly tradition that I always look forward to.

Your turn: Submit a caption for the Po pic in a comment. Fame, fortune and my everlasting gratitude will be yours if you play along.
Posted by carmilevy at 4/15/2007 11:24:00 PM

Still afraid to go near the water after watching a midnight showing of "JAWS" on TV last week, little Po clings to the safety of Carmi's camera bag.

Michele sent me too!

oh....Po, "Po is at the beach. Thank God the baby in the sun is not out so brightly today!"

Can you tell I watch that insane tv show!!! I can't believe I just said that.

After the Jerry Falwell fiasco and a career snuffed out WAY too early by the right wing conspiracy, Po contemplates ITS options by the sea....

As a parent, I am so glad that you wrote that second paragraph....I was one of the three parents that never gave into the teletubbie craze....

I vote for Maggie's idea of, "Telli-Po-rted"

If I saw this on your bag while you were out and about, the first thing I think of is:

This guy is a good daddy.

Have a good week!

The Teletubbies frighten me. They make absolutely no sense!

"holy cow...did you see the size of the antenna on THAT teletubby????"

Time and tide wait for none
But, I, Po will always wait for you.