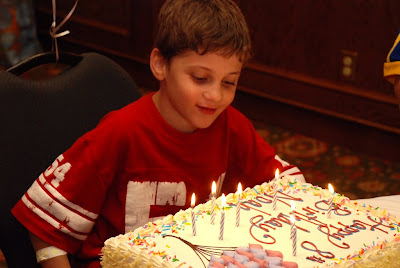 I tend to view life in terms of moments. Most of them are small, and they seem to disappear almost as quickly as we realize how precious they are. Yet they somehow stay stuck in our memory long after they've faded into the past, their vivid images reminding us why we need to try so hard to remember them.

We all make wishes before we blow the candles out. It's quite possibly the most cliched modern tradition in existence. But there's something about watching your child experience the moment that makes it anything but mundane. In that blink of a moment, I saw a child for whom nothing was impossible, who was surrounded by the people who mattered most, who knew he was loved limitlessly, who was content with his place in the world.

That won't always be the case. As Noah moves from 8 to 18 to 28, he'll be ever more responsible for his own destiny. He'll experience challenge and loss, and much as we wish we could be, we won't always be right there to cushion him. But at this moment, as he moved from 7 to 8, none of that mattered. And as he reflected on the ideal year ahead of him, I found myself wishing alongside him that his every reflection would be similarly charmed.

Your turn: What did he wish for?

Make that two: Noticed many of you have wished the little man a happy birthday...which isn't until July (the pic is dated July 2008, but I realize it's easy to miss. I'll word it more carefully next time. Apologies for the confusion.)
Posted by carmilevy at 4/06/2009 05:49:00 PM

Happy Birthday young Aries! He's a handsome fellow! I love the picture, captures the excitement and wonder of the moment perfectly!

I don't know what he wished for, but my wish for him is that he will have his wonderful father and mother around for a long, long time!

Carmi, I don't know if I noticed it before or if I did, if I said it but I can rewind to an 8-year-old Carmi and imagine him looking exactly like this... only the background would change. And maybe the shirt. He's the very image of you. And if he's as much like his dad inside as he is outside, he'll go far. Happy birthday little mensch!

And for one final (literal) reflection from the car show, here's an encore to close the loop
Thematic Photographic 43: "Reflective" v.6.0: 1953 Chevy 5-Window Pickup (redux)

Why, he wished for a pony in his backyard! Please Dad! I'll feed it and ride it every day!!
Or, he wished to fly to the land of dragons where he would slay one or two and bring home the treasure!!!

What a wonderfully captured moment... I wish him a Happy Birthday too!

Happy Birthday to Noah! If he is anything like my 9yo son, he wished for a pet snake!

Jeannette and Mojo both said it.. he's the spittin' image of his Dad. Happy Birthday, Noah. :)

he is precious! feliz cumpleaños Noah! Mojo is right, he is a little Carmi! the look on his face, looks he wished for something really special like a trip with Mom or Dad.

I was never able to make a good wish at such times and ended up making very silly ones and regretting them later (asking myself, can I change that one and use a new one instead?)

That's one lucky boy. The cake alone is proof of that. May he set his mind on a worthy goal - and GO FOR IT!

Perfect moment of capture, Carmi. He looks like he's really thinking about that wish. My son's birthday is today--he's 12! Yikes!!--but he's not getting a cake. He asked me to make Chocolate Eclair dessert instead, so at 6:30 this morning? That's exactly what I made for him :).

Time flies...no matter how hard you hold onto those moments...:)

He looks so in-the-moment in this picture. Full of joy, fully experiencing.

he wished for his own blog, and his own camera ---