The tough climb to the top

As families often do on weekends, we were running a bunch of errands to pick up the typically forgettable stuff that everyday suburbanites need. We had headed to the local mega-big-box development, a place I've come to despise as an example of all that is wrong with urban planning today. It's a place where pedestrian needs aren't just subservient to those of the almighty car, but they simply have no place on the agenda. 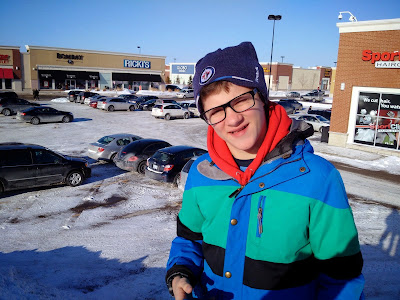 So as I was busy shepherding our kids between the highly-trafficked boulevard-scale roads with little to no real sidewalks - thank you, city planners - our eyes came across a delightfully large pile of snow. It's no secret that it's been a brutally cold and snowy winter, which means huge mountains that kids have pretty much always dreamed about. I remember clambering up them when I was a munchkin, and apparently our son's DNA is rather similar to mine, as all he did was look at me with an impish grin on his face. I knew exactly what he wanted.

So I shrugged, smiled back, and followed him as he giddily charged up the hill. On balance, I'm guessing this little episode will probably get me kicked out of the running for Dad of the Year. But in my defense, the hill was set well back from traffic, so it's not like I was encouraging him to take an unnecessary risk.

We remembered the moment when we got to the top with the kind of picture you don't normally get to take when you're in the middle of a parking lot. We took in the view for a few minutes before carefully climbing back down.

We debated whether we should tell anyone, but ultimately decided it was a story worth sharing. Because my kids didn't arrive in this world in the middle of a tightly wrapped roll of bubble-pack, and I'm guessing they wouldn't want to experience life from inside a stiflingly protective cocoon.

Otherwise, where would they learn how to climb that next mountain?

Susan at West of Mars said...

In my book, Carmi, joining him on the climb up qualifies you for Parent of the Year. Not the reverse.

Little man, is not so little any more. I think a little adventure on dad or moms part, just makes you more "Parents of the Year" even better.

What is life, without a little adventure. Pity those who never see the adventure or step out of the norm to have an adventure.