It's #BellLetsTalk day. So let's talk. 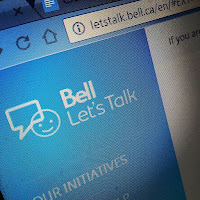 I work for a giant media company, Bell Media, which is in turn owned by an even more giant telecommunications company, BCE Inc., and today's the day of our annual multiplatform campaign to raise awareness of mental health issues.

It's called Bell Let's Talk, and the company donates 5 cents (Canadian) to mental health initiatives for every text, call, tweet, and Instagram post that uses the #BellLetsTalk hashtag. If you watch the video on Facebook or use the Snapchat geofilter, Bell will donate, too. For even more background, here's the website: Bell.ca/LetsTalk.

Whatever tools you use, have at it and please get my employer to spend as much as possible today. Trust me: They're happy to do so.

I grew up in a family and in an era when mental health wasn't talked about. People suffering from mental illness were deemed "psycho" or "crazy". They were shunned, criticized for not just shaking it off or sucking it up. They were lumped into their own lonely category. Even feared. Anyone who sought help was derisively referred to as "seeing a shrink." as if that was an admission of weakness. In my world, you bravely fought cancer or heart disease. Yet somehow mental illness - a disease of the brain - was never accorded the same level of respect.

Which, of course, drove it underground. And continues to do so to this day. Because in a world where we wrap ourselves in colors for every disease under the sun, we somehow fail to do the same for those who suffer from mental illness. I'm not sure why that is, and maybe that's a reasonable place to start the conversation. And to move the process forward.

I've seen some chatter online that this makes for great PR for a huge, profit-seeking corporation. I couldn't disagree more. All of us have different views of how different companies operate - how they price their products and services, treat their employees and customers or interact with the government. And sometimes, to be fair, some folks may not be their biggest fans. Fair enough.

But no matter how cynical you may feel about any given company, mental health isn't a hashtag. And there's nothing wrong with large companies using their largeness, brand and resources to focus corporate social responsibility on an issue that touches us all. And as much as some of us may see a dedicated day as a manufactured and packaged strategy to smooth out the old corporate image, for the rest of us it remains a prime opportunity to kickstart a process that should already be well underway, but for too many maddening and misunderstood reasons, still is not. If not them, then who? If not today, then when?

Tomorrow, of course, all of this will matter just as much as - if not more than - it does today. So don't just talk. Listen. Empathize. Act. Look inward at your own responses to those around you in need. Share this. Talk about it. Do something good for those around you. Question your own responses and ask yourself if you're doing enough, either for yourself or for others. And when today turns into tomorrow, do the same thing.

I'm under no illusions: A day of hashtag-driven awareness won't magically fix society's apparent inability to deal with this type of illness. When the sun rises tomorrow, too many among us will still wake up afraid to share their truth with others. They'll worry about losing their jobs. Their families. Themselves. Similarly, too many among us will be afraid to ask, afraid to have the conversation.

But as we've learned from the stories of true Canadian heroes like Clara Hughes, Michael Landsberg and Howie Mandel, silence isn't the answer. And from another Canadian hero, CJAD morning host Andrew Carter, who shared his story this morning, we've learned the dangers of silence. And as I learned from CJBK morning show hosts Lisa Brandt and Ken Eastwood today, there are two sides to the story.

So if you need to talk, then talk. And if you're on the other side of that conversation, take the time to listen. And to reframe how you feel about mental health, and what you're willing and able to do to help those closest to you.

Because silence is no longer the right answer.

Your turn: What's the first thing you'll do to #EndTheStigma?