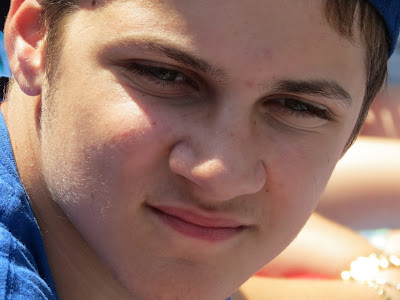 Today is Noah's 16th birthday. He's our youngest son, and as such, milestone days for him also mark "lasts" for us as he, his brother and sister continue their headlong rush toward adulthood and independence. 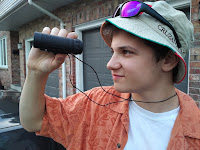 When he was (much, much) younger, I remember telling him how sad I'd be when he'd be too big for me to pick up. That happened rather silently a few years back, and he's at the point now where he could probably just as easily lift me. But rather than feel sad about what no longer is, I'm glad we all picked him up - and held his hand, and hugged him, and spent long, lazy days together just being a family - as often as we did, because all that togetherness and little-kid-ness has clearly paid off in a young man who's thoughtful, kind, perceptive, smart and funny. 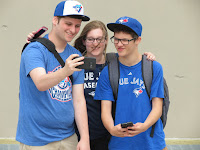 He has a spirit that makes you want to spend more time with him. So that's what we do. Every day. He walks me through the intricacies of Pokemon Go so I'll know what I'm talking about when I get back to the studio. He test-listens new music with me in the car because he knows it'll make us both happy. He will give the last of whatever he has so that those around him don't go without. He is best friends with his siblings and hardly a day goes by that I don't come home to the sounds of them all just...being. He hovers protectively over the dog because there's nothing he won't do for his beloved Frasier.

In short, he's the kind of kid any parent would love to have, and given all that he's become in 16 short years, I know so much more awaits him in the near and far future. Love you, kiddo. Happy birthday!

Your turn: Your birthday wish for Noah is...?

It's our birthday today. My gosh you have grown up so much. I remember when you were just a little man. Sixteen, that's a big date. Congrats Little man. I hope you have a great day today,

Happy birthday, Noah! I hope this year is amazing for you!

I do not need to wish Noah anything as he has it all and seems to have the mind of an old soul. He has the best dad around. Go for it, NOah.