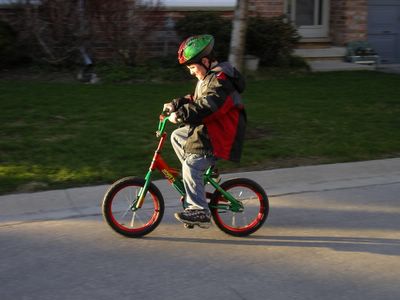 The wind was blowing fiercely as Zach asked if we could go back outside after supper. Day after day, he's been doggedly trying to ride his bike. Time and again, he's been laboring back and forth on the road in front of our house, endlessly fighting against the pedals, gravity, balance, and his own frustration. He's ridden up on the curb, whacked his shin and ankle against the pedal, fallen on the ground, and shed a few tears along the way.

But he's continued to push himself to get back on that bike. To try again. To not give up. To finally get it.

My wife and I have watched in awe as he's fought to become a real cyclist. We've stood by as he's gotten his balance for a tantalizing few seconds, only to stop himself out of fear. We've caught our breath as he's kept the pedals turning for longer than he ever has before. He's there, only he needs a few more turns before he believes it himself.

That fear will soon fade as he realizes he really can do this, and do this well. Our son is on the verge of expanding his horizons, of discovering a world that no longer ends at the nearest corner. I can't imagine being more proud of him.
Posted by carmilevy at 4/12/2005 11:39:00 PM