Waiting for the journey to continue 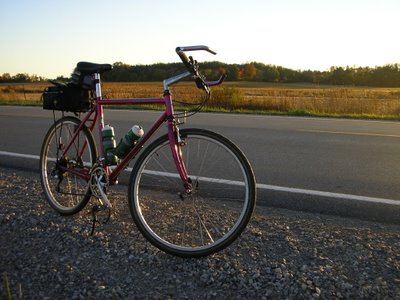 Thanks, everyone, for your kind words on my admittedly minor bout with illness. I stayed home again today, but will try to get to the office tomorrow. I could probably stay home another day, but I worry the world is passing me by while I languish at home. The weather's supposed to be nice, so I'll try a carefully-paced cycle to the office. Hence this entry...

By this date, I've usually been riding my bike regularly for about a month. I've shaken off the early-season cobwebs and am into a pretty good riding groove - to work every day, and the occasional extended ride after dinner or on weekends.

Thanks to weather and the fact that I've been away more often than I've been home, I'm well behind my usual cycling pace. And it's starting to bug me. I use my time on the bike to toss ideas around and think through things that simply can't be mulled when I'm being interrupted every few minutes. And I'm not getting as much of that quiet time as I'd like.

I once read somewhere that when you're concentrating on something, it takes upwards of 15 minutes to get back to that state after the phone rings or someone drops in. Trying to write during the day is often a futile process because I'm constantly flipping from one thing to another. Answering phones, responding to taps on the shoulder, even watching the little popups in the corner of my screen that announce new e-mail. I'm a good multitasker, but I admit I need quiet time to come up with ideas and figure out priorities.

The bike takes me away from it all. Sure, I have to avoid being flattened by SUVs and tractor-trailers, but - oddly - that doesn't seem to be as obtrusive as a ringing phone. I often point my bike just outside the city limits and cruise the concession roads that line the never-ending farms and pastures that define our region. The city literally and figuratively disappears from view. Everything gets quieter, clearer, somehow easier to deal with.

I've been home from work for two days thanks to this nagging chest cold. I still feel miserable, but I think I need to take the beater bike (my big purple mountain bike, not the one in the picture above) to the office tomorrow morning, if only to convince myself that I am still somehow plugged into my world.

Then, at the end of the day, I'll head to the country and try to restore the silence, if only for a few minutes.

About this picture: My hybridized Specialized Stumpjumper (aka the urban commando wondercycle) waits patiently by the side of Hyde Park Road, just northwest of the city. There's nothing overtly stunning about this shot, but it's always been one of my favorites. I was busy taking pictures of a setting sun and the landscape it so artfully painted, and the bike allowed me the freedom to explore the area with relative ease (just try doing the same thing in a car. I have, and it's not so much fun.) The image takes me back to a moment that I hope more of you get to experience, and soon.

BTW, yes, it is pink. A lovely color indeed.

You know, I love the IDEA of riding, but I've never found a comfortable seat. I'm more of a walker. Plus, bike helmets are just not my idea of fashion. Yes, I'm a vain one.

I agree on needing quiet space. Sometimes I drive with the radio off just so I can think. Otherwise the shower is my place of refuge.

Hope you're back on your feet...or the bike soon!

Yes, pink is good. =) Hope you are feeling better...and no, i've not ridden yet. We, here in the land of ice and snow, are still waiting for the big thaw. Hopefully soon.

I actually just got a bike a month ago. An early mothers day present. It's the first bike I've had since I was in grade school! I'm riding to try and get into shape, to get more exercise, and it's a way to get Connor to school a little faster then walking :) My husband also got one (early father's day present) :)

I hate riding bikes. I'm scared I'm going to get hit by a car. I had a couple of friends in college get creamed and it's made me a nervous wreck. I think if I got into the habit of riding, my fears would fade, but with little kids around, I haven't had the opportunity. Someday, maybe. I did try a spinning class and hated it because it hurt by back (my back hasn't been the same since child no. 2).

i ride 2 days per week because i am training for a triathlon in july. but my goal is to be able to ride the 12 miles to and from work during the summer months.

Nice bike. It matches your VAGINA!

Haven't started riding yet. Still walking everywhere I go. Gonna start here in the next few weeks, though.

Take care of yourself.

Glad you're on the mend. Hope you're back to biking soon. I get alot of that type of thinking done when I mow the yard. Nice time to just think and ponder.

I know how much you love your bikes, but I often refer to myself as a "bicycle widow" Once you start commuting by bike it takes you much longer to get home!

But I know how much you enjoy it and it keeps your heart healthy!!

I also love biking, due to my age I got a super soft bike seat and then bought an additional gel seat which I added a skirt to to go over the original seat. Actually took a 12 mile bike ride on Sunday! Spring is great!

How odd that I stopped by for the first time in awhile and you had posted about bike riding - I just this minute got back from a bike ride and it was fabulous! I love how you feel so free, and it can be so peaceful and so intense at the same time! While riding tonight I made a vow to get out at least a few times a week on my bike!

I haven't ridden since before I had my son 2 years ago. Seeing your bike makes me want to get mine out!