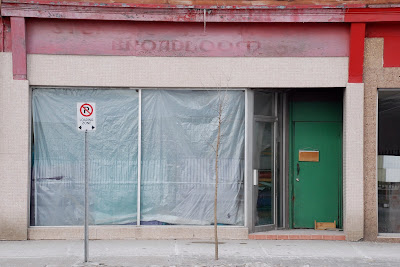 Caption to come...thanks to you!
London, Ontario, February 2007 [Click to enlarge]

First things first, thanks to Sara for coming up with this lovely phrase to describe last week's Caption This entry. Here's her perspective on the footprint in the sand:

"Gone but not forgotten."

I had a difficult time choosing, because so many of you submitted such thoughtful suggestions. This is getting harder with time, and I'd have it no other way. Thank you, again, for making the Caption This series such a success. Please follow the link to Sara's blog and thank her on my behalf.

I took a walk on a bitterly cold afternoon last week. I headed east through the depressed main drag, Dundas Street, that used to be the retail lifeblood of this neighborhood. I saw people with nowhere else to go huddling in doorways in a futile attempt to escape the chill. I saw ruined, abandoned storefronts standing silent guard over streets that most people would rather not walk. I saw a part of town that had been utterly forgotten by time, forgotten by anyone who lived somewhere else and didn't need to be here. I saw the wispy ghost of a city. I saw intense sadness.

So I walked along the southern sidewalk, shooting the ruined facades on the north side of the street and hoping to capture some of the morose thoughts that were racing through my head in an image or two. A woman walked up to me and asked me if I was taking pictures of the area.

She: It's too bad they won't ever fix it.
Me: I don't think that will happen anytime soon.
She: They'll spend their money on other things that don't matter so much.
Me: Sadly, I think you're right.

She nodded her head in agreement and continued on her way, a single plastic grocery bag rubbing noisily against her snow pants.

This is a neighborhood with lots of sighs, lots of swinging grocery bags, and lots of empty storefronts. I thought this week's Caption This image should reflect that.

Your turn: If this is your first time reading about Caption This, click here to read what it's all about. Click here for all Caption This entries to-date. Please submit your suggested caption to this photo in a comment, and I'll post the top response next week - along with yet another new image for you to mull over. Enjoy!
Posted by carmilevy at 2/11/2007 01:27:00 PM

The question mark is there on purpose. Old storefronts seem at first to be dismal, the death of hope, the ends of eras. But they also represent possibilities.

Wordpress is giving infrequent random comment errors - if you get one, could you try to tell me what the exact error is?

How about something positive?
'Rebirth begins with one small store....'

It actually looks like it might be getting ready to open, but....based on what you said about the neighborhood, it is probably doubtful...
Wonderful picture Carmi, as always!

It makes me sad to look at this picture. It reminds me of countless small towns and cities where this is happening, because a bigger, better shopping experience opened on the other end of town.

How about: Involuntary Resignation

Hi Carmi. What a sad photo. You're a brave soul to venture out in the frigid cold. I wish I did that more often, but it's hard to get me up and off the couch on a day like today. Although at 25 degrees (farenheit) it seems downright balmy here in Wisconsin.

Just stopping by to say hello.

Ghost Town of the Modern Day

Nothing clever's coming, but something along the lines of how the world continues to move on and this is what's left in it's wake.

It's been a long day.

I'm no good at this kind of stuff. I will instead rob lyrics from Morrissey, the king of depression:
"Hide on the promenade/Etch a postcard :'How I Dearly Wish I Was Not Here'
Here via Michelle!

I just happened to drive down Dundas from Quebec to Adelaide on Saturday. 40 years ago, this was a thriving commercial section of the city. I have memories of Hudson's department store, Lion Auto Supply, London Furniture and the Brass Rail. The beginning of the end was the opening of Argyle Mall and the new Woolco (now a Wal-Mart) in the far east. Next came White Oaks Mall and the Sayvette Department Store (now the Bay).

I think Anna said it well with, "thanks Wal-Mart."

P.S. I can see the reflection of a picket fence in the window.

And, is that tree growing through the cement in the sidewalk?

I can't think of a caption, but it reminds me of an Edward Hopper painting portraying the isolation we have in these times. The tree growing up through the pavement is a hopeful sign, though, showing tenacity. The lone icicle is interesting too.

Sorry I just read Kate Chopin's "Story of an Hour" and that is all on my mind!

How have you been???

Awaiting prosperity,
here to serve those brave enough to try...

How about Awaiting Delivery.

Having recently visited Johannesburg, where ten minutes after closing time you can't even tell that there was ever a business there, let alone ten minutes before, and where urban decay is the rule rather than the exception, what strikes me is how clean and whole this abandoned storefront is. The tile is in good repair, the window's not broken, there's no garbage strewn on the sidewalk in front, and it looks like it's going to reopen soon. The only clue to some longstanding neglect, in my opinion is the broken mailbox, still lying in the doorway that no one has gone through in probably a long time.