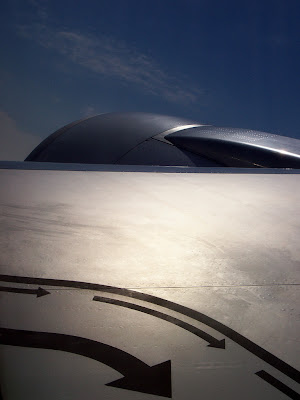 Rolling left...or right?
Over the South China Sea, May 2007 [Click to enlarge]

I've often written about the engineering wizardry that allows a carefully shaped slice of metal alloy to pull hundreds of thousands of pounds of machinery and people off the ground, and carry them near the speed of sound miles above the earth before landing very far away...sometimes across entire oceans and continents. Yes, flight is routine now. That doesn't make it any less miraculous.

As we descended into Shanghai, I found myself staring at the wing of our Air Canada 767. It had brought us clear across the largest ocean on the planet, and all I could think about was the cool-looking arrow graphic that covered its innermost upper surface. I wondered if it helped wayward pilots and flight crews figure out that the wing worked best if the air flowed backward. I had never seen this display on any other wing before, so I thought maybe it was a Canadian thing. We DID give the world Bob & Doug McKenzie, after all.

Or maybe I just liked the composition of this image. When I'm really tired from major travel, I often make strange decisions with my camera. Whatever the case, I hope you like this one.

Your turn: Care to explain the arrow thing? Or guess? Go nuts!

The arrows are probably saying to the engineers who built it 'This Way Up'.

The markings are intended for the in-flight entertainment. Sort of like stage markings.

So these markings let the Vegas style Wing Walker which parts of the wing have been designed to support the weight of a human.

The markings are intended for the in-flight entertainment! Sort of like stage marks.

So these particular markings inform the Vegas-styled Wing Walker that these portions of the wing were designed to support the weight of an entertainer wearing gold lame'!

It makes me think of Looney Tunes episode where a gremlin is on the wing of a plane, and Bugs Bunny is trying to land the plane safely. Maybe the arrows are directions for the gremlins about where to sit.

Yes, I was thinking of directions for wing walkers, too. It's a great image, anyway

The wing walker thing is absolutely correct! The B767 has emergency exits over the wing. The arrows point the direction to evacuate once the window exit is removed. An escape slide deploys from the side of the aircraft and allows passengers to slide from the aft part of the wing to the ground.
Possibly the people if placed in this situation would be more "wing runners" than "wing walkers".