I'm a fan of Google. While its "Do no evil" mantra may strain a little under the pressures of becoming a globally-dominant player in web services, mobile and social media, there's enough tech era goodness in its culture that it's easy to smile when you think of the brand.

So it was with an ear-to-ear grin that I first loaded up the company's iconic search engine this morning, and was greeted by this: 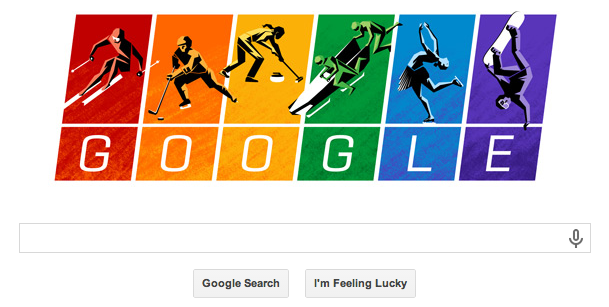 To reinforce the point, Google included this quote, lifted right from the Olympic Charter:


"The practice of sport is a human right. Every individual must have the possibility of practicing sport, without discrimination of any kind and in the Olympic spirit, which requires mutual understanding with a spirit of friendship, solidarity and fair play." –Olympic Charter

The Sochi games have raised eyebrows for all the wrong reasons. From their estimated all-time-record $51 billion price tag to the brutal crackdown on gay rights, everything about these games feels like it must have felt in 1936 in Berlin.

It's nice to see a tech company use its world-spanning platform to send a message to Mr. Putin and, perhaps, to the Olympic movement itself. This may be "just" a Google doodle, one of many that the company routinely posts to mark major milestone events. But I'll argue this may be Google's most significant doodle ever. And I'd be remiss if I let it go without saying something.

Surely this is a site well worth seeing.

I'd feel better about that message, Carmi, if it weren't for the fact that our government is leading the tech world in spying on everyone.

The excuse is to fight terrorism. I don't believe it.

It's to fight dissent.
~

I always have liked Google. They have just the right touch of irreverence ;) And it does my heart good to see a corporation of any kind do something for the right side ... just because it's right, political correctness be damned.