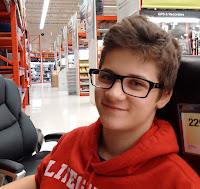 While every day that we get on this planet is special, some are more so than others. Like the day when our youngest, Noah, was born. It was 15 years ago that he made his grand entrance, and ever since then he's done his best to make sure we all get the most out of every day we've been given.

I've written before about what makes him special (here, here, here, here and here). He's kind, and will often give the last of whatever he has so that others don't go without. He's whip-smart, with a sense of humour that keeps us all eyes-open from the moment we wake before dawn to his smiling face to the moment well after midnight when we tuck him in and, ah, encourage him to put down that book underneath his comforter and finally get some sleep. He's athletic, and easily excels in whatever sport or activity he chooses.

My wife calls him "the total package", and the writer in me can't add anything to that because it's the perfect phrase to describe him. Everyone seems to love him, and it's easy to see why. He's an amazing little brother to Zach and Dahlia, and he manages to make friends no matter where he goes.

I know I'm his dad, so a little parental bias is easy to understand. But when every one of his teachers this year spent the entire time we had during parent-teacher interviews gushing about how much they enjoyed having him in their class, I realized it's way more than just me.

I've long called him our Little Man, but I may need to change that given how much he's grown in the last year. He's already taller than Debbie and Dahlia. He's rapidly catching up to me, as well, and I know it's only a matter of time before I have to stretch to hug him. Yet he's still as huggy as he was when he was a munchkin, still treats his dog as if the future of the world depends on it, and still finds ways to make every day in Levyland just a little bit brighter.

Time moves too quickly, and it's made the past 15 years feel like a blink. Yet at the same time we can't imagine what life was like before him. Nor would we ever want to.

Happy birthday, Little Man. May you always shine with that glow that makes you as special as you are, and the rest of us so lucky to have been blessed with your life.

He is my special Love-bug. He's growing into a wonderful and tall young man. Takes after his daddy. He was so excited for his birthday that he was up at 5:30 am and reminded me several times that he's half way to 30. We are truly blessed with 3 fantastic kids! Xo