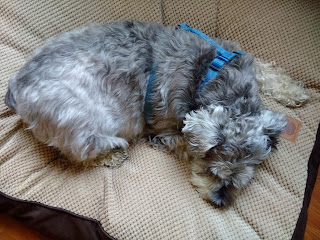 Ten years ago today, we brought home a scraggly 8-month-old puppy. He was so scraggly, in fact, that the heavily matted, black furball who showed up at our door gave way to a silvery-grey sweetie once our groomer got her expert hands on him the next day. That transition from darkness to light seemed to define his life with us from that moment onward.

You never quite know what can happen with a rescue dog, and Frasier's life was never predictable or linear. He wasn't trained in the traditional sense - so there was never a hope of bringing home large trophies after jumping through hoops and charming the pants off of ascot-wearing judges with fake British accents. He never walked in a straight line, instead zig-zagging back and forth across the sidewalk as his nose searched for whatever it is the nose of a hunting dog searches for. Being the dog-dad-pushover that I was, I simply held onto the leash and laughed at him.

But he was a good dog in ways no best-of-show ribbon could ever approach. He knew when his people needed him, and always found ways to weasel himself into whatever it was that you were doing. He protected us fearlessly, played with us with all his heart, and made friends with everyone (and every dog) he met - but only after a deafness-inducing barking fit that let everyone within four blocks know who was calling the shots. Once he was your friend, he was your friend forever. His life with us was charmed, and we cherished every day we had with him.

From that first crazy day of Levyhood, it didn't take him long to make us his. And just as quickly he became an integral part of us, an indelible addition to our family.

Indelible, of course, isn't the same as permanent. As often happens with schnauzers, he was diagnosed with diabetes a few years on. And as much as we wanted him to hang around forever, we lost him in December. It still feels sad, with an emptiness in the house that grabs at us when we least expect it: As I wake up and head downstairs, only to realize he isn't curled up in a ball at the end of the bed. When I check my watch and realize it's time for his walk, except he isn't yipping at me from the front door or staring me silently in the face. When I hear a noise coming from around the corner and for a fleeting second think it's him. Only it isn't.

We've gone from being dog people to not being dog people, which feels somewhat off to me. For all the inconvenience and expense that comes with owning a dog, I always loved how all that inconvenience and expense felt in the chaotic fabric that is a modern-era family. I enjoyed having built-in walks every day, even if the weather outside was frightening, because I needed those walks almost as much as he did. I enjoyed how we became known to friends, family members, colleagues and even strangers as the family with that cool dog, Frasier. I enjoyed the fact that something with four legs and zero language skills - well, not English, anyway - had the power to temporarily remove us from life's treadmill, and remind us that kindness and unconditional love were, and are, precious resources.

Almost three months after we took him on that last ride to the vet, it doesn't suck any less. But the alternative - no dog to begin with - is unimaginable to me. I can't even begin to think what we'd be like if we had never had him in our lives. Losing a dog is sad, but you eventually figure out a way forward and, if the universe smiles on you, you bring another furball in need of rescuing into your family. Never having a dog to begin with? Well, that's worse than sad.

I'm glad we had him, because no one else could have taught us that last lesson as effectively. Thanks, buddy.

Your words are true... Losing a pet is hard, the pain lessens but its still there just like a wound that's healed. Its gone but the memory is still there of how u got it.