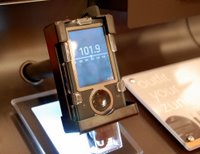 From the annals of consumer product naming language faux-pas comes the latest one, courtesy of Microsoft. It seems the name of their just-released wannabe iPod-killer, the Zune, means something somewhat different in Quebecois slang French.

"A Microsoft spokeswoman in Montreal told CanWest News Service that 'it was pointed out to us' during focus groups in the province that the proposed brand name sounded much like a French-Canadian term used as a euphemism for penis or vagina."

"The French word 'zoune' and the variant 'bizoune' typically serve as a less jolting way of referring to male or female genitalia when addressing children."

Me again: This brings to mind the Buick LaCrosse (renamed in Canada because in Quebec-slang, it could refer to something unmentionable in a family newspaper) and the Chevrolet Nova (wasn’t selling in Latin American countries because it means “won’t go” in Spanish.)

Your turn: Got any other examples of badly named products?

About the picture: I snapped this image of the Zune this past Monday afternoon at the Super Target near our hotel/conference site. I came across a couple of store employees setting up the display a day before its Tuesday launch. I excitedly asked them questions about the product - partly to test their knowledge, and partly to warm them up for the inevitable photographic pitch that followed.

See, I had my camera with me (I know, big surprise) and once I finished playing 20 questions with the employees, I asked the younger one if I could snap a picture. He looked at the older guy, who promptly told me no. Not "no" because there was any reason to say no. But "no" because he enjoyed his little opportunity to go off on a power trip. His tone was condescending. He was nasty, and I don't like nasty.

So I sauntered off to another part of the store, and eventually meandered back to the display, surreptitiously looking for my new nemeses. They were two rows over. So I ducked back, zoomed in, turned the flash off, cranked up the ISO and reeled off a few pictures. I got bolder, and approached the display for some closer-in images. Still no sign of them. I walked right up to the thing and kept shooting. Suddenly, out of the corner of my eye, young guy appeared. Busted. "Hey, I said no pictures!" I smiled, plaintively said I couldn't help myself, that I was addicted, and walked away, hoping that he hadn't just summoned the store's rent-a-cop on his walkie-talkie.

I got to the front of the store and felt the pit of my stomach leap into my throat when I actually saw said rent-a-cop come out of his office and walk toward the electronics section. But by then my group had already begun to gather by the checkout counter. Zune boy and his minder would have to wonder what happened to the snap-happy guy with the strange accent.

The Quebecois slang screwup is just another of Microsoft's Zuny Tunes. The name Zune is just one small part of the problem, but a significant one. The words iPod and iTunes are variations of real words that point to real things. But what's a Zune? What does it point to? Nothing. Plus, it rhymes with all kinds of things Microsoft probably doesn't want to rhyme with, including Apple's dominant and highly successful music marketplace. What were they thinking?

Not smart. Downright Zuny (sorry). And that's without mentioning screwy MS "points" ordering system or shared songs that evaporate after 3 days or the inability to use the device as a portable hard drive.

How about clamato rimmer? (for cocktail glasses I presume)

Carmi, this cracked me up! Too funny. I've heard of the Nova troubles that Chevy had. I also remember in marketing class in college, they talked about how Gerber's had to relabel their baby food jars in Africa because people thought the photo of the baby meant that there was ground up baby inside the jar, instead of food!

Stopping by to say hello. Hope you're well.

*LMAO* too funny. I don't think I can look at product the same anymore.

Nope, my only advice is buy an iPod.

They recently named all the roads around here, which used to be numbers. They named the main 55 mph highway, Parkway Lane. It just bothers me because it's not a lane!

Even though I don't have that reference for Zune, I don't like the word much. Do you remember zube tubes? I still have one.

HEH HEH, brings a whole new meaning to "don't leave home without it."

LOL! This is too funny. I'm going to have to think on this one to come up with something. I really need to tell my husband about this one.

Remember that spoof commercial about what if Microsoft made the iPod?

Not as bad as when the ancient Commodore Vic was released in Germany ;)

Here from Michele.
Your story about photography in a store is very true. I always feel as if I'm trying to sneak a picture. So I end up being clandestine.

But it is usually easier to ask for forgiveness than for permission.

Microsoft = too little, too late.