Across the road from my in-laws is a huge park called Quiet Waters County Park. One fine morning, my father-in-law and I took the kids there to vent some steam on the very large jungle gym. Before long, little man advised me that he needed to ... you guessed it, pee.

Quick aside: When it comes to a four year-old's bladder, it's not a matter of if he'll need to pee. Rather, it's a question of when. We plan our trips around our his pee breaks, and don't go anywhere unless the Bathroom Disaster Plan is fully documented and synced to my PalmPilot. Aside over.

So I scooped him up and half walked, half ran to the bathroom which, if it wasn't at least half a statute mile away from the playground, sure seemed like it.

After he was finished exploring every feature of the hand dryer, we headed back outside to rejoin his older siblings. As we came outside, I noticed that the city had laid down a neat layer of reddish cedar-like chips around the bases of the nearby trees. The contrast with the roots was beckoning me. So I pulled the camera out of the holster on my belt (yes, it went everywhere with me on this trip) and grabbed a few pictures. A mother nearby wandered over with her similarly-aged son to see what I was up to.

Only after I finished shooting, as Noah and I reviewed the pictures on the screen on the long walk back to the playground, did we both notice the uncanny image I had just captured. Even now, I get chills.

How does this image make you feel? 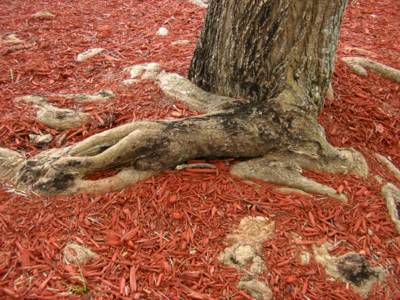 "Holy crap, is that cool or what?"

(That's how it makes me feel.)

It almost looks like the ground is covered with chilis. It makes my kinda hungry, actually.

I wonder, am I the only one to see the wolf? I had to bring it up large, zoom through it till I saw what's there on the right, just about center. Then I knew! I brought it back down and saw everything! (I was first like, "What? I'm totally not creeped out by this. Carmi, you and yer illusory images...doggonit!) Haha!! :)

Cool but kinda creepy - something about the hind legs makes it look corpselike.

Still, it's way more interesting than anything I've ever seen whilst returning from a public washroom.

Freaky. Yes the contrast is very nice, but the roots that look like...we'll it looks to me like a lean healthy dog curled up sleeping next to the tree.

Whenever I see a dog sleeping I enjoy that contrast too. When awake the dog is healthy, happy excited and full of energy with tendons flexing, tail wagging, muscles tensed and twitching in reaction to everything that is going on around it. While sleeping however, their body is relaxed. Pointed ears flop down, a tightly curled or flapping tail is relaxed on the ground and their eyes which are wide open and always searching are closed, off chasing frisbees in a dream field.

So, that's what it makes me think about, and as I think about that I feel a sense of loss that as a child, and still as an adult I yearn to share a bit of my life with a pet dog for some reason.

Totally know what you mean about the youngster's bladder...

As for the picture...at first I saw the wolf lying there fur messed up, and then I saw more of a human corpse, as for feelings, I don't know, mostly just drawn into the image, drawn to make something out of the tree's roots that isn't really there.

Or maybe the wold was buried there and the roots grew in that shape and surfaced as the tree grew older.

I have seen on tv that can actually happen...it may not be just a freak coincidence.

Since you say you take your camera everywhere, I'm glad that we got a shot of the tree...and not the pee. Hee!

Wow, amazing! I can see the wolf, but it looks pretty creepy, I wouldn't want to be there alone at night!!

The colours are so vivid - another great photo Carmi :)

This reminds me of the time I first tried those magic eye pictures. Those frustrated the hell out of me. Just TELL me what I should be seeing cause see, I thought it was a dead animal.

wow. I can't believe how realistic it looks. It's amazing what you can see in nature when you look closely enough...

G'Day Carmi, I must admit when I first saw the picture, I thought, excuse me, then I took another look and clicked on it to make it bigger. How fascinating, the "universe" talks to us in many ways.

Very cool picture! A lot of people said the wolf was dead, but he doesn't look dead to me. To me he looks hot - he's spread out and he's panting.

I think the Native Americans look at wolfs as a good totem! Perhaps this is a good luck sign for you and your family!