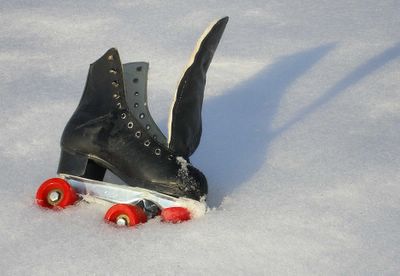 First, I love the contrasting colors; the stark black against a pure, untouched snow with the pop of orange peaking up in the wheels.

The unlaced boot of the skate and the free-wheeling, straight-up tongue act like a beacon that says: the snow is temporary! Hoist me up, knock off the slushy mess, sit me out to dry for a bit, lace me up, find my mate, and lets roll!

Two things spring to mind: 1. That can't be good for the leather, and 2. who lost the lace for that expensive roller skate?

But that might just be the parent in me talking.

It's rude to stick your tongue out.

"Longing for summer" sprang to my mind. What a neat photograph!!

I too, love the contrast of the skate with the snow. But to me, this photo brings back many memories of rollerskating. I had the exact same pair as a child and loved them but when I first got them they caused me grief. Rather, other kids gave me grief over them. Because they were black. A boy's skates. Girl's skates were white. But I got over that quickly and donned my black skates anyways when I realized that I was one of the only two kids who even owned rollerskates on my block. So, I rollerskated... and I was happy.

Hmmm...looks like the Little Old Lady Who Lived In A Shoe actually owned a mobile home... Did she suffer a foreclosure?

What springs to my mind: "I ain't got time for the summertime blues. Ice Hockey! Snowball fights! Sledding! Wee-Hee!"

Dagumit Thumper! You beat me to to it! That was the very same thought I had! LOL! :-)

The second thought I had was a bunch of Lilliputians were trying to escape something and had to bail and run.

Run away! Run away!

Looks to me like someone was a little confused!