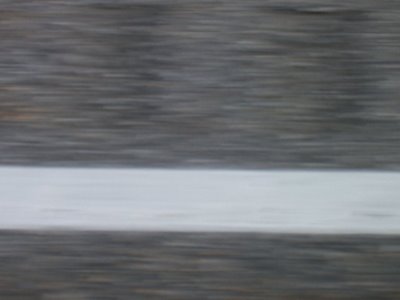 730 km of seemingly endless white lines between home and our destination. Hundreds more kilometers of the same scene on the way home before we arrived safely back in our driveway last night.

I took this out the passenger-side window somewhere near Kingston, Ontario last week. We were en route to Montreal for a bit of a summer vacation with family and friends. I was idly shooting out the window, thinking that I didn't have a shutter speed fast enough to capture the scene without a tremendous amount of blur.

Then it dawned on me that the blur was the whole point. That a tack sharp image wouldn't tell the story of movement as well as one taken with a woefully inadequate shutter speed. That even if I had a camera that could manage such a fast shot, the result would be just as static as an image of the gutter in front of our house.

In the end, imperfection made a blurry image worth remembering. I'll have to keep that in mind as I twirl dials and adjust settings to capture the world around me. Sometimes, the image as it appeared isn't the story that needs to be told.

Your turn: Do you keep so-called failed photos? Why?

For years, nearly all of my photos could have been called "failed". I kept most of them, or I would have had none at all. My grandson was here earlier, and we were looking through a box of photos of his mom, aunt and uncle when they were children. None of them was a really good pic, but he was enthralled (mostly laughing at the 1970's hairstyles...LOL)

With the advent of the digital camera, we all have the delete option as never before. I don't think we should be so quick to press that button. Who is to say, years from now, what is "failed" or very meaningful?

I have kept some of those "failed" images because in their imperfection-something happened and it became the right picture. Of course, sometimes-they are just bad and those I quickly hide and dispose of!

I actually do, not all of them, but some seem not so much as "failed" but really as fated. They show a differn't perspective then we originally tried to capture...I like that.

I keep less and less these days as my CD's are full and I can't remember what I took and what I didn't.

some of my funniest photos of the cat are blurred.

I just got back 40 photos from SNAPPY SNAPS and they are all blurry. They're mostly of the baby but I kept them. Turns out the camera was on the wrong setting. I might still put them in the album anyway. Maybe as a blurry COLLAGE!

I keep some, not most.

Your photos always amaze me.
I don't keep the bad ones now...since I went to digital! But if something looks really intriguing, such as this one of yours, I believe I would keep them.

Hi Carmi...LONG time no see or hear...! Hope your time in Montreal was lovely. I love that photograph....And sometimes I do keep what one might call a 'failed' photograph....especially if it failed in a really interestimg and unusual manner you know?
Good to be visiting you, as always, my dear.

My favorite wedding picture of my hubby and me is a blurred "failed" picture. Thanks for dropping by my blog today...great read here and I will be back again soon!

I certainly do! (Probably because that's the majority of the ones I take -- but I just call them "art" and it's okay!!!) This particular one of yours is striking in the fluid movement -- you can literally feel yourself speeding along. As always, Carmi, incredible eye.

I tend to find the ones other's refer to as "failures" some of my most artistic accidents. I'm not so talented as you, Carmi! My good shots are good, sometimes great, but my accidentally artistic masterpieces are definitely worth the save. (Of course, the really crummy, "What the heck is that?" sorts get trashed quickly.)

I wonder how you've been...

Carmi, this is a lovely photo. It looks like an original pastel and the fact that you haven't reworked it in photoshop make it all the more better. Love it.

I keep them all, I find that the failed photos are the ones that actually speak the unwritten chapters of our lives. Kind of like the single sock!

I have no choice.

Luckily you weren't behind the wheel~,:^)

i was just about to send you a link to my ( sometimes blurred) photos of colorado, I did 960 miles one way Thursday ( a week ago) night, driving solo. and then Monday did the same 960 miles ( 1544km) in the opposite direction.Can you guess; was I in search of: rare trout fishing, trophy deer, a great golf tournament or a beautiful woman?
i just printed some failed photos, thet help tell the story