Tools of the trade 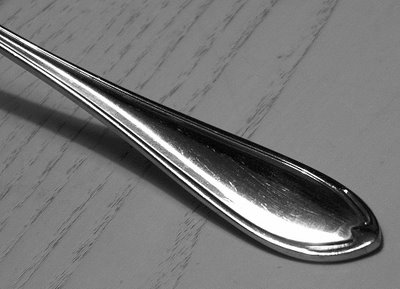 I originally took up photography because I figured if I was going to write for a living, I should also be able to take the images to accompany my words. As I've honed both skills, I've learned a number of truths that apply to both skillsets:
So there you have it: Words and images are meaningful to me, so much so that I've built a professional life around them. I can't tell you how lucky that makes me feel.

Your turn: Take the time to look, again, at the image above. What do you see when you look more closely at it? What story does it tell?

Hmmm...well, you would make a great teacher with a question like that.

I think it's some type of flatware that has, perhaps, been in your family for some time. Perhaps it has a history. And it's sitting on a wooden surface. Perhaps that has a history too. That's all I can think right now.

Michele sent me to you and MorahMommy! What fun to hit the whole family in one night!

Have a great evening!

I see metal on wood. But then I'm one of those people that believe everything is simple, it only looks complicated because you're missing some of the details.

A tool, that upon its invention, made us into a somewhat couth and more graceful people who no longer had to eat with our hands. A tool that is simple in its design, well-balanced in the hand and having a form which follows the intended function to a tee!

hmmmmm..... I wonder who has held that spoon... what dinner conversations has it heard....... how and where it was made and if the person making it took pride in creating something so functional yet beautiful in its subtle detail...

I love this post. It is apparent that you love what you do, and that you excel in both art forms. Thank you for continuing to share your talent with us.

Found your blog by browsing. What an interesting question!

Going against the grain - you have two grained surfaces at odds with one another...the brushed metal across the finished wood...

Have a great Friday.

I see a piece of flatware that has been in many situations, birthday parties, quiet romantic dinners, family celebrations, holidays. It has a vast story to tell, if only it could speak

"She stared at the spoon and thought to herself... Oh no, I have to take that damn cough syrup one more night. I hope I can get up in the morning!"

Hope you have a great weekend, Carmi.

To me, it stands against the grain. And I like that. I think we should try to challenge the grain every now and then

I see all the scratches that come with a lot of good use. The family/person that owned it, ate at home a lot.

Is it yours, Carmi?

It looks like Flatware With A History to me. :) Something about the grayness of the wood suggests, somehow, a vaguely Colonial setting...I imagine a young man in a powdered wig sitting down to a bowl of something hot of an evening, for some reason. :)

Hello from Michele's, and happy weekend!

Carmi! Great to see you this fine weekend. I'm with Brenda - that is exactly what I saw. But I'm also with Tia - I like to know about the people behind the images. And dinner parties with chatter and laughter and good stories to tell...there's deffinately more behind that spoon and table.

Here from Michele.
Well, the wood grain in the background makes me think of picnics; picnic tables to be exact. An outdoor supper of grilled hamburgers, or chicken and sides of potatoe salad and green beans grown in the garden, cooked with a few onions for flavor. The smokey smells of the barbecue, the loud humming of the katydids and the laughter of children. Of course we have to have the spoon or fork to get all that good stuff into our mouths.

Back again this morning, Carmi! Loved reading the other responses. Very interesting. Hope you have a fantastic weekend!

I see the single piece as lonely, where is it's spoon friend where is it's knife buddy? Did they leave him along to attack them meal - is the person using him lonely also? Did they recently lose their friend and buddy?

The first thing I thought of was a spoon brought up from a sunken ship... don't ask me where that came from??

But if only it could talk ;)

Hum... I am a bit more interested on what stories that bit of cutlery could tell us...

Michele sent me... Have a great weekend !

to me it speaks of a family dinner table. with laughter and teasing and love.

have a great weekend, Carmi! michele sent me on this trip, but i would have come on my own anyway! :)

I see a nice dinner gathering of friends and relatives. I hear laughter and great conversations....

Love your photos...Can I add you to my blogroll?

I'm thinking flatware that's been in your family for a couple of generations. But it's well polished with no nicks or scratches, so its not THAT old. However I'm staring hard at the pix...it is a color pix, right? Not a B/W one?

Here from Michele!!! have a great weekend!

i really like the minute scratches on the handle of the spoon. very cool. the grain on the table is nice too. i think i may have had some silverware like this.

as my som would say:
Suuuweeeet!

its about contrast:
light and the shadow
hard shiny item and soft dull wood
something immovable (table) versus something that never stops moving (spoon)
contrast this: a single spoon on the table that will need to be shared if everyone is to get some of the ice cream

Hmmm... maybe it's the lone piece of flatware yet to be picked up after an evening spent with family and friends? I always find one or two out somewhere, even if I've already tried to clean up!

It's a bit of a cheat for me...as I know the history of the table and the spoon.

It reminds me of our little apartment when we first got married. I love to cook so we always had people over for dinners and brunches.

It also makes me think of the new adventures we've experienced along the way over the last 14 years.

And of course, all the yummy meals!!

Here via Michelle, but I would have visited anyway!

"There is no such thing as mundane."

Hey Carmi..Michele sent me this time although I am one of your reg readers lol

I think of a full satisfied belly.

And culinary pornography, when those who eat choose to describe their experiences.

'Born with a silver spoon' comes to mind.

Michele sent me this way.

back again today from michele's.

carmi, i always wonder as i am reading your blog, how you always seem to be so inspired.

how do you do it?

The bleached woodgrain makes me think of French Country furniture. :)

There is no such thing as mundane.
I love that.

I think it's saddened that it's brother the salad fork accidentally fell into the garbage disposal and is scarred for life.

Michele sent me back, Carmi. It is interesting to read all the comments that came in after my first one.

I see the contrast in the two elements of metal and wood. I also see a history. Perhaps a recent history, perhaps one from long ago, but a history nonetheless.

Here, this time, from Michele's.

I see intricate scratch marks made by numerous people, mostly from generations of family, who have left their mark while having their meal. It bespeaks an amazing chronological distance.

I find it really odd that everyone assumes it's a spoon. I've reread your entry (like 3 times) and you never said it was a spoon. So I'm sticking with a fork - cause you can't eat CAKE as easily with a spoon :) but you can eat ice cream with a fork :) :)

It's the dinner table of a policeman who died in the line of duty.

since i've just come from taking my state teacher test for licensure today, i have to say you hit the nail on the head... reading is all about seeing that text and pictures have meaning and are related...