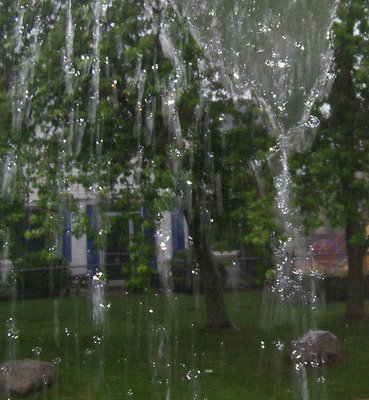 After Noah's birthday party, we came back to the house to spend some quiet time before dinner. The forecast called for thunderstorms to roll in. So I checked the radar, calculated that I had between 45 minutes to an hour before the rain would begin to fall, and headed outside to start the BBQ.

Either my math was off, or the clouds accelerated, because the thunder started almost as soon as I dropped the burgers and hot dogs on the grill. It was still far off, but I cranked up the burners just in case.

I cooked like I had never cooked before, hoping that I'd be finished before the skies opened up. Angry black clouds began their march from the horizon. The thunder grew louder.

Quick aside: I'm intensely afraid of lightning storms. Standing outside with metallic cooking utensils in my hands is not exactly my ideal place to be when lightning threatens. But I had a house full of hungry folks and a little birthday boy. Finishing off the cooking in the microwave just didn't seem like a viable option.

As I was getting the last of the food off of the grill, it started to rain. Hard. I sprinted into the house and headed to our kitchen, now delightfully full of friends and family. As everyone tucked into dinner and the room filled with the banter of happy folks, I quietly ducked out, grabbed my camera and headed for the front door. The intense rain coming off of the overhang over the porch seemed almost curtain-like. I knew it wouldn't last long, so I snapped off a few quick images before rejoining the party.

Your turn: What is it about falling water that almost begs for a photograph?

That is a great photo! And an almost exact representation of what it looked like at my house today and yesterday!! Rain, rain, everywhere!!

I think the best part about photographing running/falling water is that you never know how it will turn out-you can stand in the same spot for five minutes adn just take picture after picture and they will all be unique.

i don't know about a photo, but i do love to stand and watch it, especially when i'm tucked away inside my home, but not my car.
happy birthday to your son!

poetry in motion.
Rain is beautiful. I even marvel at the beauty of hurricane force rain.

What a terrific photo!

I hate storms too.

Sorry, but my maintenance nature is kicking in. Do you need to clean your gutters?? ;-)

I, too, am afraid of lightening. Very afraid. At my nephews last t-ball game, I was teased mercilessly for fleeing the field in a pancic at the first glimmer of a lightening bolt in the distance. Sitting in an aluminum lawn chair next to a chain link fence just didn't feel safe to me....laugh all you want! Great picture!

Oh you captured that sooooo well! In words and pics. I feel I was you. Sounds likes a delightful scene to step inside to.

Glad the skies held off opening for long enough to get everything grilled.

btw those peppers are still reddening more than a bride as the garter-belt toss approaches.

What a photo! I've said this before, but I am constantly amazed by your eye.

I think photographing water is appealing because there's no way for the photo not to show movement, and that makes for a much more interesting shot.

I am terrified of thunderstorms. Water is relaxing! But it's not good to look at dripping water when you have to go to the bathroom. Oh sorry, I ruined a nice post with toilet talk!

Sounds like you had yourself some perfect timing there! The photo is amazing and it must have been a pretty impressive storm.

I don't find rain all that appealing for photograph's but that's probably got a lot to do with the fact it rains about 95% of the time in England!

I was looking at all 107 (!!!) of your pictures of Noah's b-day on Flickr yesterday and I was laughing because I knew people in the pictures that are outside of your immediate family. I thought to myself, "I know too much about this Canadian Man!" LOL!

Today you posted the link to the picture from 12/2004 and I remembered when you originally posted it and I thought to myself, "I probably know more about this man I've never met then I do about some of my friends I see frequently!"

Pretty cool, huh? Thanks for letting me be a part of your journey!

Way back when I moved from Texas to Nevada, I knew my light shows from God would be gone. I filmed a rain / lightening storm once on the old VHS tape. I still get it out and watch sometimes to get my pouring rain fix :)

Rain. Love it only when im inside! Fantastic post, Carmi! And I love the piccy. I think that any nature pic can be pretty awe inspiring.. sunsets, rain, dew, flowers.. :)

Before I forget, Michele sent me to say hi again.

Water is hypnotic to me. It just begs to be touched with my fingers or with my tongue in a childlike way. As adults we get all silly, myself included about getting wet from rain but if you ever just stop and let it drench you when you have the time it is really quite cathartic.

Water? In summer it is the very picture of "cool" and looking at it, photographing it can actually make you feel cool, even on the hottest day. In winter it evokes the same, only with a different reaction; not "cool" but "cold and icy" and makes me want to find a warm fire. Above all else, water seems so elusive. You can't hold it in your hand or pick it up off a table (without a sponge or towel), it seems almost magic. To capture a water droplet in mid air... amazing.

I think that water being one of the most amazing elements makes it so photo hungry.

I love water. This picture makes me smile.