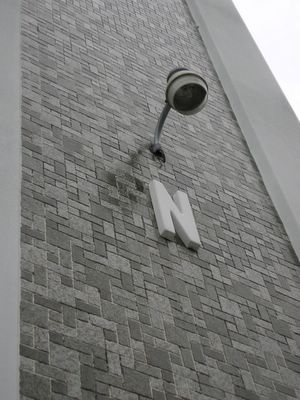 The buildings in most late-20th century condo developments are likely not going to either win any architectural awards or stand the test of time as examples of classic design. They're well-built, and they do the job for which they were designed. No more, no less.

I suspect most people agree with me, because they never seem to pay attention to the few architectural details that were designed into these buildings. So I was as surprised as the next person when I looked up while on vacation and saw this scene. From afar, it looks somewhat benign. But from the low angle, it jumped out at me.

Your turn: Take out your camera and shoot a similarly plain detail. I'd bet pretty much anything can be made to look interesting with the right perspective, angle, composition and thought.
Posted by carmilevy at 11/04/2006 11:25:00 AM

I'll see what I can come up with later today.

Have a good one Carmi :)

I'm gonna have to dig out those brill photos I took of the Bristol Eye Hospital - a building people just usually walk past....

Have a Happy Saturday, Carmi - and thank you for the good wishes, my dear.

They seemed to have taken some time in laying out a more intricate pattern in the brick than usual. I'll have to see what I can find in my file or perhaps when I go pick my brother up at the airport....

Here all by myself today.

I agree with you...Guess I am going to have to do some looking through different eyes than I usually do! :)
I am here from Michele's site!

I think that I'm going to have to be a bit more observant. Now where did I put that camera??

I mentioned you in my post today and if you visit...you'll see why and I'll be taking your words here to heart.
Great composition on this photo!
Here from Michele's again...kinda...as I visit you anyway without the Meet & Greet.

From Michele this time.... hey, your comments work, why don't some of the others, or is it fixed now.

I really am on my way out to find something ordinary to photograph... really... really I am.

Well, at least I am headed outside in the cold (cold for Virginia Beach) and cut a white pumpkin. It is supposed to be good for pies and soup and should be orange inside... we will see.

I look at your photo and Jenga jumps out at me. When I was a kid my father took a closeup photo of the grille on the front of a school bus, but thanks to the angle of the shot and the filter he used, it looked like something out of Kubrick film.

I will have to give that a try. What I want to know is what the "N" signifies on the building? You've got me curious. Great shot!

Ahh.. perspective. What a wonderful thing. Here from Michele's today, but here from myself regularly.

Hey Carmi, thanks for your comment. I think you'll get a lot of holiday info from me, Aginoth and Mrs A - but maybe not so much from the others :-)

I'll have to go through the pics on the computer and see if I have anything to illustrate your point.

It looks like the time stamps are all messed up today - at least at Michele's they are. She sent me to tell you.

What a fine wall. I bet (lick) pigeons would love to perch on that lamp.

I notice the architecture features that work for me. Like a flat roof of seagulls...

I must admit I'm more interested in the details on Victorian buildings than modern ones. I'll have to take a look and see what I can see. Here from Michele's, where the posting times are still all mixed up, so I have no idea who I was really supposed to visit.

I'll have to look for my camera. It's dark here which may complexify matters, hm. Good thing for electricity, eh? :)

If I capture an interesting image, I'll blog it tomorrow.

One of the reasons I would never succeed in a science career is the dismal interior architecture of most laboratories. Totally practical and sterile. Which I guess scientists like.

Hi again from Michele's. In response to your comment on my blog about the genealogy - I did get some information from family members who have since died, but I wouldn't know anywhere near as much as I do without several years of intensive research. It gets addictive after a while!
I'm guessing with your name, your research would take you back to Europe fairly quickly. I'm not sure what the records are like there for detail and internet access - Scotland is very good (although a bit of a money sink!)

That's a great picture! I'm back again via Michele.

You know I didn't pay that much attention to architecture until I started taking my photography more seriously. It really is art in its own way.

I dropped by to check out your D80. I looked very seriously at that one but I have been with Canon since my big old school camera in 1983. And I ended up going with the EOS 30D.

Can't wait to see all your future work....you were great already with your small camera!

Carmi, you are taking some amazing pics these days. Love them!

Oh, Carmi, I'm sorry. I look at your very nicely composed photo and see a building identification letter of an appropriate size and contrast with its background, with a security light to ensure that it's visible to police and firefighters at night. I've spent a lot of time working out just where to locate such details so that they do their job, but don't detract from the overall design of a building.

Whenever I walk a friend through NYC who has never been there before, I say "Look up... always look up." It's a good bet that you'll see things you never expected to see.

It's the N that intruiges me--placed so neatly, and from your angle, ambiguously, underneat that light. I really enjoy this photo.

I have some interesting "mundane" shots from Germany...I'll have to post them later!!!

Wow thanks for opening my eyes. Isn't it funny the little things that we miss?

Now, into this cozy business model enters cheap distributed solar PV, which eats away at it like acid.