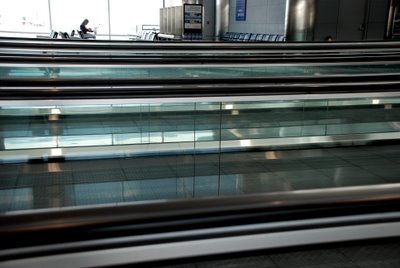 There are so many reasons why this picture shouldn't work. Prime among them was my need to overexpose the window in the far background so that there'd be enough light to bring out the foreground elements. Every time I lift the camera to my eye, I make choices, I guess.

But enough of the tech stuff. I originally wanted to take a fast picture of the moving sidewalks at Denver International Airport. I was waiting at the gate with the other members of the Canadian contingent. We were on our way home, and I thought I'd grab a few last glimpses of the place before we boarded. The moving sidewalks seemed worthy of a picture - linear forms seem to attract my attention - so I composed and waited for the passing folks to drift out of the frame.

Apparently, DIA is a very busy place, because I waited for quite a while before the sidewalks were empty. And when it was, there sat a lone woman, waiting for her flight. Suddenly, the image took on a meaning somewhat different from my original intention. I'll never know her story - indeed, I'll never even know her as anything more than a distant silhouette. But that's what makes filling in the blanks from afar so much fun.

Your turn: And her story would be...?

I have always liked the moving sidewalks. I wish they would put them in everywhere.

I agree that the silhouette adds a nuice touch to the photo and leads ones eye in, over the many hurdles of the floorway rails.

And Hi from Michele's!
rashbre

Michele sent me though we posted at the same time Carmi....
LOVE this picture....Her Story? I don't have a clue...but, she looks like she got so involved in what she was reading(?) that she didn't hear her call....! Fun, huh?

She's waiting for her flight? Sorry - not much good at writing stories.

I expect she's been to a boring conference and has arrived back at the airport far too early for an inconveniently timed flight paid for by a company too tight to pay for business class so she doesn't have access to the nice lounge.

Well, dear Michele sent me back again...! That little gubbins!
Do you save as many pictures as I do, Carmi? I mean I have thousands!!! It's kind of crazy...but, unless they are out of focus or just boring....They Get Saved...And you. my dear?

She's waiting for her husband to come back from the men's room . They will have a cup of coffee before the plane takes them both home after a deserved vacation...
Not much of a history here, but your pic is great, as always. Love the perspective and the silhouette!
Michele sent me this time !

This is a fantastic photograph. She looks lonely to me...

Michele sent me over today....Hi!

Hi Carmi, here from Michele's today. I was at Denver airport earlier this year, camera in hand, but I didn't see what you saw!

Hallo, nice piccie as always, I like the slant you put on your images. Here from Michele's this lunchtime!

Story? She's flying home alone and tends to be nervous about getting to the airport on time. So naturally, she's early... hours early. Alone at the gate is a welcome solitude, a time for reflection. This lady probably loves driving in the darkness of early morning when no one else is on the road.

Awesome photo, Carmi. You ARE a whizz with that camera!
Her story....she's a college student, sitting there on her laptop, flight to the northeast has been delayed due to weather. And she wanted a quiet spot to email her boyfriend, so wandered over to the empty gate area.

I am back - as myself, to say that I walked that very same moving sidewalk ( but I did not see you)
The place is crazy busy, and so strange that you have to take a train ( tube) to meet yourr luggage!!
I will look for shady characters with cameras on my next trip thru Denver International. Have a great day, Carmi!

Michele sent me over to see you off from Denver, Carmi.

ORF has a couple of these moving walkways. I always feel like they are ejecting me off at the end. Ours are so slow that you could actually walk faster off of them.

A cog in a machine that is bigger than life. We are like specks of sand in the whole of it all.