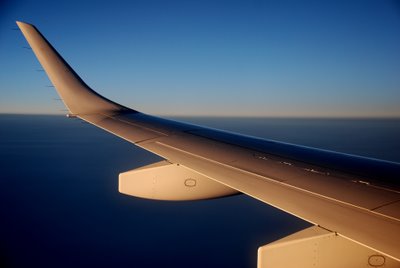 On my way to Colorado a couple of weeks ago, I captured a picture of the wing of our Embraer 190 and shared it in this entry. One of my little photographic quirks is I like to revisit similar subjects at diffferent points in time to see if I can bring home a different result.

I do this because photography is anything but a static medium. The camera captures ephemeral glimpses of the world around it, and the resulting scenes are heavily influenced by natural and artificial light. You can walk by the same building every morning for a year, and it will look different every single time because the light is never the same. It evolves through the seasons, and is influenced daily by weather and even by us.

So as we flew away from the sun and into the darkening night, I wanted to capture the last moments of orange light on an impossibly complex piece of engineering that, at that moment, alongside its right-hand twin was holding over a hundred people seven miles above the earth.

I really like this picture, Carmi. However feelings might be the wrong way to go in this case. My appreciation for it is strong but intellectual. When I examine the feelings side of me I find that the picture induces a feeling of cool remoteness. Austere but cold sunlight hitting the cold metal of the wing. Brrrr!

The strong lines and clarity of the light appeals to my sense of design, Carmi, but not to my feelings. What conflict!

Wow, I wish I could take photos like you, Carmi.

But I'm Muslim and I have a beard.

Keep up the great work. The wing seems like a plank I need to walk down, then I jump to my death.

On second thought, it reminds me of a shark (which is related to walking down a plank).

Calm, peaceful, silent, ...
It reminds me strangely of a still life painting, almost static, staged... the wing poised between the sky and earth.

I actually feel calm looking at this picture, something to do with the deep colours, I think.

You know I've flown on countless planes -- and made more than a dozen long-haul trips to Australia (ie. 24-hour flights) and loads more short-haul flights -- but I've never taken a photograph out the window!

On my last flight, to Venice, Italy, we flew over the Swiss Alps and the view out the window was absolutely breath-taking.

It make me feel free. No worries!

Great shot. Difficult to get a clean enough window on an aircraft to take a shot like this. looks as if you are outside the plane.

I like the intersection of horizon too, nice comp.

Yup, and here via Michele's! Have a great weekend.

It made me want to be up there on my much anticipated trip to the UK... Monet of course knew what you know, that the effect of light makes all the difference to a subject
Michele sent me

Terrified.
I'm afraid of flying.
but it's still a cool photo.

Back from Michele's again! Hi!
I love this photo...I get a real sense of freedom from it!

I am very biased. Planes take me home. And I am going home in January , can't wait. Even if the direct flight means over 13 hours in a plane, from Madrid, Spain to Santiago, Chile (first I have to get to Madrid from Barcelona, a short flight, but still time consuming)

So your image makes me feel very happy, it tells me I will be soon with my parents, family and friends. Couldn't get any better or more promising!
Here via Michele's

YOW! I love this photo, Carmi. Great clarity and colors. It looks like an executive jet to me with such clean, sharp lines. Beautiful!

I like this one, too.
The previous entry about the same wing was somehow enlightened and this has much more fire in it. Instability. The beginning of something new. Energy.

I wonder if you ever read comments...

I read every comment on my blog. Much to my regret, I don't have the time to respond to all of them. Regardless, I treasure each and every one.

Thanks for dropping in!

My first thought was that Twilight Zone episode where the demon thingie was out on the wing tearing it up, but was only visible to one passenger.

But I know this is of no help to you. How did it make me feel? Like I wished I was on that plane, going somewhere...