If you build it, they will come

Construction sites offer an almost limitless number of opportunities for photographers. Their transient nature makes them a compelling target of opportunity, because if you don't go Right Now you'll miss it forever. For the entire duration of a project, every day offers up a buffet of optical choice, only to be replaced by an almost completely different buffet the next time you visit.

This one's a neat one, as it's an extension to the Jewish General Hospital, the place where my wife and I were born - though not on the same day. It's also where her mom had been admitted this summer, and where we had gone to visit her.

Thankfully, patients weren't being seen in the building you see here (sorry, couldn't resist.) In the years since I lived in the now-long-gone paeds ward, they've added on so many new wings that it was initially hard to figure out where I once was. But a funny thing happened as we got off the 6th floor elevator and turned toward her room: it all looked incredibly familiar. After I was all fixed up, the hospital had closed the paeds ward and converted it to geriatrics in a poignant comment on the evolution of today's society.

As we got further down the hall, I realized that this was exactly where I had stayed when I was a kid. And although the rooms themselves had been heavily renovated and the numbers on the wall were all new (617 is now just a memory), this had been my home away from home long ago. 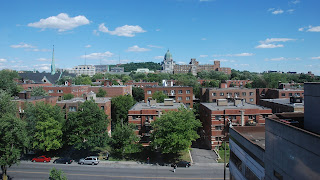 As the kids chatted with my in-laws, I slowly paced the halls and tried to remember what it had once looked - and felt - like. I wandered into a waiting room and looked south toward the St. Joseph's Oratory and St. Mary's Hospital (where our eldest was born.) The photo on the right encompasses the view I had, then and now.

As I turned my eye back inside, I realized how much had changed. The playroom was now a sunroom, complete with old furniture covered in cracked vinyl upholstery. The sounds of kids had been replaced by those of folks at the other end of life's spectrum, a hallway now crowded with haphazardly strewn walkers, hampers and charging medical equipment. It saddened me to think of how much need we now have for places like this, and how glad I am that we have them in the first place.

The yellow supports in the photo above will eventually give way to new spaces for health care, research and outpatient care. Future generations of patients and families will have their own connected moments with this place. Some will be happy, though most, I fear, will be anything but. You can paint them any color you want, but sooner or later we'll all find ourselves here for one reason or another.