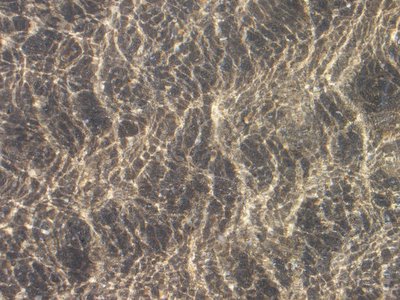 We took well over a thousand pictures during our winter vacation to Florida. I've been slowly dropping them onto the blog ever since. But at the rate I've been shooting and writing, it would take until the next century before covering them all on Written Inc.

So in the interest of remaining on speaking terms with extended members of the family, I posted the entire lot of them to my Flickr site. The specific set from this trip can be found here.

The picture above resulted from my not-very-evolved strategy to wade into the surf, point the camera down and keep shooting until something decent-looking came up. Of course, the sun was so bright that I had no idea what I had captured until long after we got home (call it the curse of having blue eyes: I'm virtually blind in bright sunlight unless I'm wearing shades. And even then...)

I ended up with a few neat ones. I've previously posted and written about Shadowed layers and Lightning strikes. This is yet another view of something that ceased to exist a fraction of a second after I took it. I'm already looking forward to our next visit. I'll point my lens down again, and I'm sure I'll come home with entirely different views of a scene that most folks would just as soon not know ever existed.

WONDERFUL!!! When I first looked at it, I thought Ohhhh that's peobably a dust particle blown up as to be very frightening! (lol) I'm so glad it wasn't and I LOVE What It Is, Carmi! Great idea to point and hope, especially where there is movement...I'll have to do that when I can...there was that time I took the city lights...
I do not have Flicker...but I may do that.

I do Flickr. I don't know much about it, though :D

thanks for coming by & seeing me. nice pictures. i have not been to florida, yet

No, Carmi, I don't Flickr, but I might have to start. I love your surf photos; the patterns of the water are wonderful.

I just send all my digitals to clarkphoto lab through the net, because I got lazy and didn't print any since Sept. It was 280 photos for only $20 what a deal.

i like shots like this one. i think you and i have a similar sensibility. not that i am suggesting we're snesible. hardly.

i do not flikr but i have got a new image gallery started up at my place. only one photo in it so far tho ;)

I love the water pictures. I don't do Flickr, but I've been thinking about starting. I've got hoards of pictures scattered willy nilly all over the place. Here via Michele's today!

I have pics up at Flickr but I don't really "use" it as such lol.
Michele Sent me back !

Yeah, I flicker. I don't have any group or anything, I just have a bunch of pictures up and a flicker badge. Maybe you ought to write a Michele primer to flickr for those of us who are morons. And yes, I count myself in this group.

Here from Michele, and I loved your comment on my blog about the whiner.

I'm not a flicker-er, but I've thought about it. I hope you're enjoying your weekend, Carmi!

I started a flicker account when I first opened a blog. But haven't used it in so long I don't even remember the password.

Often the sun is so bright you just can't see the screen and looking through the viewfinder doesn't guarantee you will get that exact frame. When I'm in the car and something comes up I just do the "point, shoot and hope" thing too.

I think I forgot to say "Here from Michele." Kind of like, "Live from New York, It's...

kind of looks like the inside of a lung. Intriguing image.

I don't do flickr, but I do have a photogallery as part of my blog.

Michele sent me back, dear Carmi...This photgraph is more fantastic the more I look at it! Faqbulous!

I've just started using Flickr. I love it! And it's so much more reliable than Blogger for uploading pictures...

I should probably get my old pictures on there, too, but... I'm so lazy!

(And you probably know who sent me here)

Though it's from a much higher latitude, I've seen this before in Lake Superior's Pancake Bay. It's like a freshwater ocean, really. Excellent shot. The more pictures you take, the better photographer you'll become, regardless of if your actually trying or now. It's true.

That's a really gorgeous photo. I love how abstract it is.

Also, I know what you mean about shooting blind and hoping. I have the exact same problem of blue eyes that don't cope well with bright sunlight.

I love that picture!

I don't do flickr, but I think I may...your blog is beginning to convince me that i should!

I use Flickr and love it. My username is mrsdort so feel free to add me!

I love that picture by the way :)

Hello Michele sent me Carmi. I don't do flickr myself but I have shot photos blind in bright light to see what I got later. Sunlight through water is one of those gift images.

No Flickr account yet, but am thinking about it.
Awesome photo, Carmi. Where did you vacation in Florida?
Michele sent me.

Another great picture. It looks like you were looking down on a desert from very high up.

Good picture. I shall wander across to your flickr site, don't be surprised if I add you as a contact!

And Hiya - Michele sent me!

I love this water photo! All of your photos are wonderful and I am always inspired when I come see what you have posted! And what you write to go with the photos....beautiful!
I have yet to look into Flickr, maybe I'll check that out.
Here form Michele's!

What a great shot. I recognized what it was immediately, as I tried taking a similar shot in Florida 2 years ago. Pretty cool.

I do Flickr, and I just added you to my contacts. I don't have nearly the number or quality of photos you do though!

This photo makes me want to go to the beach! I've never done Flickr, I might need to look into that. Here from Michele's....