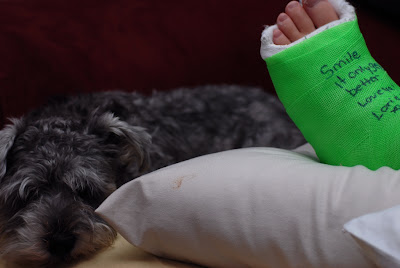 Someone to watch over me
London, Ontario, September 2007 [Click to embiggen]

One thing I remember well from my own childhood adventures with casts is how the experience affects everyone else in the family. In so many subtle ways, everyone in our house has stepped up to the plate over the last week and changed his/her routine to ensure we continue to lead a somewhat normal family life.

Well, normal is a relative term.

Noah and Dahlia have been helping by fetching his crutches, adjusting his pillow, and being there whenever he needs something and Debbie and I aren't nearby. They've even largely set aside the sibling rivalry thing for now, recognizing that he's not in much of a mood to zing them back. We don't have to ask: they just do. It's heartening to watch.

The dog obviously doesn't know what happened to him, but he knows something's changed. He hangs around Zach like a magnet. He's such an exuberant dog that we've had to prevent him from jumping up on the couch for fear he'll bump Zach's leg. But that doesn't stop this sweet dog from regularly walking up to him, bringing him a toy, nudging him with his nose, making sure he knows that he's there.

Frasier has become Zach's protector. And in all his 20-pound, untrained-puppy glory, he'll stick by his oldest human sibling until he's sure he's all better. So when he curls up beside the cast and closes his eyes for a little nap, we're comfortable leaving him there because it makes both of them feel just a little more normal.

Pet therapy?? Absolutely! Having two cats is what pet therapy is all about.

Although a puppy curling up at the end of a casted foot is pretty darn touching.

many times over the last year i've come home crying and nora, my cat, has come, lay next to me, and licked my tears. she's good about knowing when i need some cuddles.

I didn't see the dog at first. They are wonderful, aren't they. Just what the doctor ordered.

I am all about the pet therapy! :) I am glad to finally be back at my blogging and I have enjoyed sifting through all your images from the last couple of weeks...

I think it's quite amazing how pets understand when 'their people' are not quite right (physically or emotionally) ... we get a lot of pet therapy in this household. Our old cat Tom is very wise and intuitive and will be by your side no matter what. Buddy, our dog, is very supportive and protective, despite being the equivalent of an adolescent. The sisters (2 year old cats) each have their own way of communicating with us and tuning in to the dynamics of the household and those in it. Pets truly enrich our world. Hope Zach's healing goes well. Peace, JP/deb

The love of a pet can make everything seem better. Very touching story and post Carmi.

I think that pet therapy is the best therapy... their fuzzy little hearts just go places that people's can't.

Can that dog get any cuter?? OMG he has completely and utterly stolen the hearts of many.....from the first photo you posted of him.

My grandmother had a cat for many years. When she moved into a retirement home, she took the cat with her. After a year living there my Grandmother's health began to decline to a point where she had to give up her apt and move into the nursing home section of the building. However, she wasn't allowed to take Penny the cat. It was devastating for my Grandmother and for a week and a half she was so distraught. Finally, the woman who ran the reception desk, whom my grandmother had become friends with told her that she would take the cat home with her, and would bring Penny back to visit anytime my grandmother wanted to see her. This was good news.......my grandmother was very grateful. Her distress went away. the next morning, after hearing that her cat was looked after, my grandmother passed away in peace.

Pet therapy is great! Sometimes when I can't sleep and I get up and sit on the sofa in the dark, my little dog will come in, jump up beside me, and just lay his head on my shoulder. It's like he knows that I just need that comfort of his presence. It's like he's saying, "I'm here for you and I understand."

Ruby, our 60 lb, 7 mo old Bernese Mountain Puppy is not quite therapeutic for Sean. She can be a bit wild, so he often yells, "Get Ruby away from me!" The sibling thing, I can identify. Yesterday Sean got a cast while the boys were in school. Luke, 10, literally ran in the front door, into the office, grabbed a Sharpie and signed Sean's cast all in about 1 minute. Stitches used to be all the rage in this household, but we're moving up in the world apparently.

What an adorable picture!!!

Charlie, my little cocker spaniel, drives me crazy! But at the same tme, I couldn't imagine being without his company!

Carmi,
Are you sure that's a dog and not a Muppet?

I have to admit, as much trouble as Wendell the asthmatic plastic-eating cat has caused this year, I do get something special out of scooping him up in my arms and giving him kitty hugs.

But I really need to stop letting him eat macaroni and cheese.

I had surgery about a year ago that meant a two week recovery, and my sweet little gray cat Flora was a huge part of my speedy healing process. She's a big lovey anyway, but especially when I was feeling unwell, she was extra sweet and attentive. She would curl up against me and purr and sort of hug me with the side of her body. It was just adorable, and I know it provided some therapeutic value for sure.

i would be lost without my kitty moo cuddling up with me when i am feeling down. he absolutely knows the kind of mood i am in before i do and gives me exactly what i need.

michele sent me over this early morning to get caught up with you.

happy new year to you and yours!

Uh OH....I can see it's been way too long since I've visited here. Shame on me!
I'll be backtracking to find out what happened to Zach.
The photo is priceless, Carmi! Another example of a photo saying a thousand words. I love it.