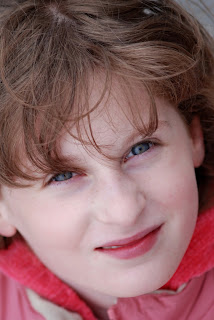 When our daughter, Dahlia, wandered downstairs this morning, she was greeted by balloons, streamers and posters that my wife had painstakingly put up late last night. My wife does this every time one our munchkins celebrates a birthday because she believes that these days are special, and deserve to be acknowledged as such.

I watched her look up at the streamers that criss-crossed the living room. She came a lot closer to them this year than last. Indeed, she seemed less a little girl and more a young lady. Part of it was her height: she's shot up noticeably this year. But mostly it was the way she carried herself, the way she spoke and moved and laughed when I made a joke.

She is her mother's daughter. Every time I see her, I'm reminded of my wife and why I think it's so cool that we made such neat kids. She's got a personality that would melt the heart of a complete stranger, and I find myself looking for any excuse to hang out with her so we can banter. She's an easy kid to like, and I'm proud of the person she's becoming: smart, empathetic, funny and intense.

I still can't quite internalize that this is the same person who came into the world weighing less than my laptop, who I've called Peanut Girl forever because her ultrasound looked just like that, and who I always saw in my rose-colored dad's eye as a tiny little girl. As she finishes up her first decade on this planet, it dawning on me that she is doing a pretty good job becoming the person she is destined to be.

happy birthday to you Dahlia. My son Max is turning 10 on Saturday....double digits is a biggie.

What do I hope for a newly minted 10 year old? Peace on earth.....oh and an excellent music selection....

and the ability to reach out to one another with empathic hearts. I know two 10 year olds whom I think have that ability already. Lets hope they find their way to
places where they can use their inherent talents.

Peace and friendship, a good education, a job she loves one day...and that she meets a man just like her dad!!

Happy birthday, Dahlia! Even if it is a day late:-) May you grow from a beautiful girl to a beautiful young woman, with confidence and abilities to match each other! I wish you a life full of vim and vigour, zest and zingers: and if you occasionally meet with lemons, may you find a good recipe for lemonade to go with them:-)

Here's to a better world, and you your part in it!
N.

Happy birthday to your little peanut from my little peanut. It must be something about the 12th that makes beautiful daughters.

I hope for peace, for talent, for joy, for childhood to last a little longer, and for the love of her mom and dad to be ceaseless, endless, and always joyful!

I didn't realize our girls are so close in age! My angel hit 10 in a few more weeks. I'd your angel already has the greatest thing she needs....a loving mom and dad! :) Happy Birthday D! :)

I hope for space to blossom and grow, resiliency for life's lessons, wisdom to find your way, and strength to claim your place in the world.
Happy birthday Dahlia! xx, JP/deb

Such a pretty child.

Wish Dahlia a happy birthday from me. 10 year olds have so much energy and minds of their own.

I wish her joy and peace along with love touching her wherever she goes.

Girls are always so precious for their dads. Girls too see the world of their fathers. GOD! I miss my dad!

Anyway, e-hugs to the munchkin!

That he or she never loses the ability to play...

Happy bday to Dahlia..I sent her best wishes on your wife's blog.

I hope that she follows her dreams..enjoys her remaining childhood yrs. All of which I have no doubts she will because she is fortunate enough to be in a happy, well functioning family. All testimate to the great job you and your wife are doing as a loving cpl towards eachother and your surroundings.
So many ppl are not so fortunate to have that as an example...(something I know)

Happy Birthday Dahlia!! The world is your oyster, to be so young with all that is to come for you. Enjoy your birthday and I send you all my greatest hopes for the future.

Am not a mother as I don;t think that the furry felines count, but I am a proud aunty. I feel that should Girlpants ever become a fathe rot a little girl that he would take out a replica shotgun to warn off the boys from the age of 10.

I hope that your little girl had a wonderful day. For me, thinking ahead, I would love my little girl to keep a positive, happy and healthy outlook on life. If she retains that, then she could deal with anything that was thrown her way in life.

Happy Birthday, Dahlia. My wish for you is that you will always find peace and joy in any situation you might find yourself in. May you share a wonderful life with your family and hope for a bright future for you.

She is a lovely girl with a lovely name. You and Mrs. Levy sure have some gorgeous genes!

Happy Birthday Cupcake!
12 years ago I was so excited to be able to say i was 10. My mum was so excited I had double numbers - and then cried that its been 10 years already! Ah, parents!They can be soooooooooo embarrasing!

Dahlia, I hope that as you grow up, and you go through your crazy independant woman stage, doing what crazy young ladies do, I hope you realise that your family, no matter what happens in life, no matter where you go, will always, always be there for you - and they will love you unconditionally forever! No matter what they say -they really will!

Now thats a big statement to swallow - but its great to be reminded of that!

And as you grow up, never lose your love for others, always do what you can when you can to the best of your ability, give anything and everything a go if you want, go to the four rounded corners of the earth and experience life in other cultures and countries!

Whatever your passions are and will be - follow them - because you cant say you failed if you were doing what you love - and there is no failure - there is only more lessons to be learnt so that next time is a better result!

Mistakes are not bad. They help us grow. You cant learn if you dont make a mistake - so embrace them!

Dahlia - you are going to be the mini mum to your brothers, but dont be too hard on them! They are boys after all! Respect Zach's space because he's the mini man of the house, and having his sister around all the time. But you might feel a bit the same with young Noah too, but thats okay, one day he'll think he's too old to hang with his groovy sister - but then you'll treasure the times you do hang with him!

I hope that you continue to be amazed by the balloons and the streamers as the years go by! You will get older, but keep your heart young!

Many Hugs from Australia!

What an awesome thing to experience, the love and the watching them grow. What could I hope for a kid like that other than the continuance of the good stuff.

Happy Birthday Dahlia-- all the best in the world to you!!

I hope your brother's leg heals nicely too :)

I hope that she has within her the sweetness, kindness and compassion that her parents seem to possess. With traits like that the future will open it's arms and dance with her.

Happy (belated) Birthday, Dahlia! Ten is terribly exciting. I remember practically bursting with joy when I finally reached double digits. Twenty years later, I wish I could go back!

My wish for you, though, is an adage that's been around a while, but I still find it poignant:

(See http://www.bobperks.com/wish.htm for the full story.)

Many blessings to you now and in the future!

Happy Birthday!!! I hope it was a great day and the year brings lots of great happy memories.