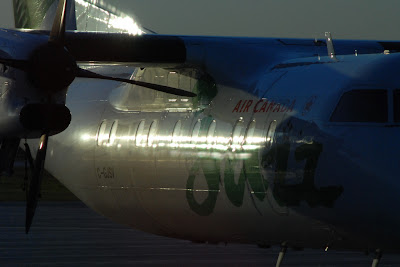 I don't often post the same photo twice. I figure my shooting rate is high enough that even if I live to triple digits and post eight times a day, I'll never get my entire photostream into my blog (that's what my Flickr account is for, anyway.)

But following last night's plane crash in Buffalo, I find myself thinking about my aunt and uncle who, as we speak, are probably on approach to the airport and may get a sad glimpse of the crash site below. I think about the folks who went to the airport to pick up friends and family, and instead found themselves face to face with unspeakable tragedy.

I keep thinking about how we've all been there and how we all relate to the everyday. So I wanted to share this photo I snapped of a Dash-8 that I took almost two years ago as I set off on a trip to China.

I was going halfway around the world, but the first leg was on an old friend of a plane that had carried me all over the province. When my father was sick, it was a Dash-8 that took me home, just as it did my wife when her mom was hospitalized. This same plane took me away countless times for work, but more importantly it brought me home and allowed me to hug my kids on the airport sidewalk.

I'm saddened by the simple fact that so many families didn't get to have that moment on a crowded airport sidewalk. What I wouldn't give to reach into the wheels of history and change its direction just a little.

I've never been a fan of the -8 but hubby spent years working on them in Wpg before he moved to TacHel and the Griffons. He's crawled in and around the belly of those beasts many times.

My heart goes out to those whose lives have been forever altered by this accident.

What's astonishing about this story is that given the configuration of the neighborhood where the plane went down that more people on the ground weren't killed or injured. That will be cold comfort at best to those who lost loved ones in the crash, but it is something to be thankful for.

It's hard to imagine icing happening as suddenly as this must have (if indeed that was the cause of the crash). Seems like even rime icing would have taken time to build to a point where it would bring the aircraft down, and the crew would surely have noticed that something was amiss. But based on what I heard, they were here one moment and gone the next.

Once again we're faced with the unassailable truth that we can't afford to wait to let those we care about know we care about them. Because the opportunity may be taken away by the capriciousness of the universe at any random time. I re-learn that lesson every time something like this happens. Because one day, it will be my turn. Either to be one of the ones lost, or one of the ones losing.

Ok this will be rather nerdy, but the first time i flew a Dash 8 was about 20 years ago out of the Toronto Island Airport. Was heading to Ottawa. And I decided that some cool music would be the last track of side 2 and the first track of side 1 of the soundtrack to Top Gun. Essentially taxiing and catapult music. I cued up my brick sized Sony Walkman tape player so it would play it just right. and in a short take off and high climb angle plane like a Dash 8, it was quite cool to think you were on the deck of a carrier. Especially when moments later you were over water and banking away from the city over Lake Ontario. Great little planes.

We always think that traumas happen to 'other people'. Thing is, we are the other people. I sat with my aunt and sobbed and asked, "Why me?" She responded, "Why not you?".

I pray that God's peace carries these families through this time and that people all around them will reach out in love and support, easing the burden for months to come.

Carmi, how I wish no one has to ever suffer this again, ever.

With loss of life there is loss of a certain meaning.

What a horrible tragedy. I feel great sorrow for all the loved ones left behind. As someone said on you blog, it shows how we need to keep short accounts and love everyone like it is our last day on earth.