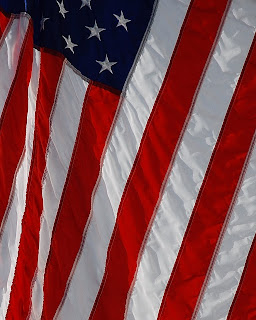 It may seem redundant to be posting a picture of an American flag so soon after my homage to Canada and its flag, but hear me out, because there is indeed method to my flag-waving madness.

Although I'm not American, I've always admired how our neighbours to the south wear their patriotism so obviously and proudly. They fly the flag, they sing the national anthem, and they let their blood pressure rise whenever anyone challenges their nationhood. They exude a level of passion for their country that often shames laid-back Canadians into questioning why they, too, can't be more effusive.

Sure, things can tend to the almost-ugly side of jingoism on occasion. The uber-bravado can grate on the nerves of those who tend toward the more subtle side of the nationalistic spectrum. But all things considered, it's refreshing to see such love of country so deeply embedded in the national psyche. There's a lesson there for other citizens of other nations, and radical fundamentalists notwithstanding, those who don't get it don't need to join the party. Everyone else is, of course, welcome to bask in the glory of a country that still inspires its people to stretch just a little bit further.

It is difficult to encapsulate into a small comment section everything I feel when I think about the flag of my country. I served under it, have paid more dearly than most for our freedom, but nowhere near as dearly as those whose names we etch into granite walls and monuments.

To me, it represents the idea that sharp minds and astute reason can prevail over familial blood rule, that a radical idea can work, and that words on paper can be more powerful than armies.

As a democracy — though some debate over what that word really means and whether we truly are or not — we are no longer unique in the world; many nations have adopted the concept of constitutionally formed, parliamentary based self-governance. But we were, if not the first to try it, certainly the first to succeed with it.

It is interesting to me that, aside from the tragically displaced Native Americans, everyone here is, or ascended from, immigrants. There is no "American" blood line, per se, in comparison to an English, or German, or French (though we all still cling proudly to our ancestral heritages!), yet the children of those and other nations interact freely and assimilate, and we have formed a distinct American culture.

Immigrants still flock to this country, sometimes with only two English words in their vocabulary: "American Dream." The notion that one can succeed and prosper here with determination and focus still permeates the thoughts of the disadvantaged elsewhere in the world. That's why were are the hardest-working people in the world.

We are not a perfect nation, but I believe our nation was founded on an idea perfect in that no single mind holds it arrogantly hostage against modification, that its flaws are by decree forever correctable, and that corrections to the idea are made in committee, with voices and notions heard from all corners.

That is what has preserved our nation, our democracy, our freedom for these 234 years since its inception: the ready acceptance of change — to the Constitution in the form of amendments; to the government in the form of regular elections; to the power, in the form of replacing the president, at a minimum, every eight years. This keeps us strong, this keeps us the most powerful, the most admired, and at the same time the most despised nation on the planet.

And Tony has said everything, so I'll just add "Amen"!

We don't mean to be arrogant and jingoistic, goodness knows, but we do love our country and its founding principals of democracy and freedom and exploration.

Beautifully said, Tony. Sometimes, those who achieve the most are the easiest targets for those who would be envious.

Thank goodness the world has such a great standard-bearer.

There's something about knowing it was a struggle to make a new nation, a struggle to be independent. It's like the story of humanity, in a way. We all want to live how we want, be respected and loved for who we are. So our flag represents that dream for the people who founded our nation. And the fierce independence they showed, fought and died for.

You said a mouthful.

There's nothing more to be said after Tony's post, except maybe Amen and Amen.
Thanks for asking the question Carmi.

Tony sums it up exceptionally. My own thoughts on the American flag: Nationalism tends to get ugly quickly - "My country right or wrong." Patriotism is always respectable - "I love my country, and will strive to correct its wrongs."

I'm always proud to be associated with patriots, and hope continually that the freedoms we enjoy will be maximized by creativity, industry, and forethought. Unfortunately, too many people use it as a license to practice for stardom on Jerry Springer.

I think of the dream, the struggle, the promise, the amazing accomplishments, the altruism, the mistakes and willingness to admit them, I think of my Dad, the veterans, fascisim defeated, the common people ascendant-and that at peril today...I see so much in the flag....9/11.....It brings tears to my eye....American exceptional-ism.

Every nation has done ugly things. But only the USA and Israel are called evil...perhaps because they challenge something powerful that really hates human freedom...
Thanks for listening.

Tony, here's a standing ovation to you! So eloquently stated.

It's not easy to describe the feeling I get when I look at our flag, except I do know that it reaches to my very soul. When watching the parade of flags at my son's Navy OCS graduation, from the first colonial flag through to our current 50 stars, I saw in the field of blue how freedom spread across this country, uniting territories under the same Constitution. Further, as states, the freedom to form governments dedicated to the protection of specific assets and serving the diverse needs of constituents. We are the UNITED States, and I pray we never forsake the trust of our founding fathers.

Thank you, Carmi, for your honest and, I know, heartfelt post. As always, you pose a provacative question, prompting me to really think about what I see, not just feel, in our flag.

I lived in the states for 8 years.
I too admired their passion for their country and flag, that we as Canadians do not have, and can learn from.

I am proud to be an American, and I love our flag, which is a symbol of our nation. The red and white stripes symbolize the original 13 colonies, and the field of blue with 50 stars represents the Union, with the stars representing the states.

What's cool about that is that as we grow as a nation, our flag changes. The field of blue has 13 stars, 15 stars, 48 stars, and 50 stars - as the nation grows and changes, so does our flag. Does any other nation's flag do so, while still belonging to the same government?

What's not cool is the way some people use our flag as a contest, as a challenge, as a way to separate those who they deem patriotic enough from those who they don't. We can love our country and the principles it upholds without being jingoistic, exclusionary, and chauvinist(in the original sense of the word).

Thank you, Carmi, for challenging us Americans to think about this.