Look to the sky 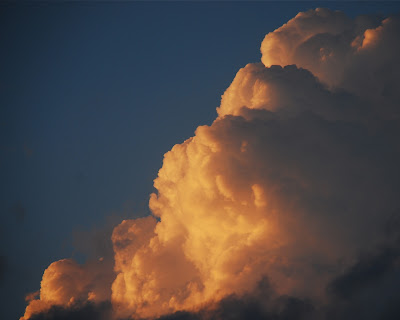 To say it's been a rough week would be an understatement. Our barely-a-puppy dog is now our diabetic-barely-a-puppy. We wake up at 5 every morning to stick him with a needle - which, as you can guess, he absolutely relishes, to the point that he now helps us get the insulin into the syringe. We then watch his every move, wondering if he's drinking too much or not enough, going outside enough or not enough, or even breathing too heavily or not.

He's not his usual boisterous self. Sure, he's as sweet as he's always been, and as our good, dog-authority friend said, dogs don't have the "woe is me" gene so he has no idea he's got a dark cloud following him around by virtue of a genetically defective pancreas. But he's just, I don't know, off. Doesn't hog our pillows as soon as we get out of bed. Doesn't jump onto the couch when we're sitting on it. Doesn't play with his stuffed snowman with quite the same oomph of a crazy schnauzer.

We're worried. And I know some non-pet-types are probably laughing by this point, as he's a dog. Not a human. Not a father or grandfather. But an animal. He can't speak, can't type and can't help cover the monthly bills. He takes up space, ruins our sleep patterns and wrecks the house.

But he's mine. And ours. And he matters to our kids. And in doing so he's become an integral part of who we are, of our family history. And as we take him back to the vet for a day-long series of tests tomorrow, we find ourselves wondering and worrying about this little thing who's already had enough tsuris (difficulty) in his life. I wish I could wave a magic wand and make this all go away. But that's not how life works.

Instead, we walk him a lot more than ever before. Which gives me lots of time to stare at the sky and wonder. Which leads me to these clouds. Because I spotted them last month after one of the more vicious electrical storms in recent memory. Apocalyptic floods, falling tree limbs, you name it and these clouds unleashed it on us.

And when it was done, there was this. Perhaps impossible-to-forsee goodness can indeed emerge from the darkness. The only way to know is to keep looking for it.

Beautiful cloud photo. And I know exactly how you feel about your pup...one of my five is an epileptic that is on a stead diet of meds and vitamins and I always worry. He is a dog, yes. But he is mine. He is special. He has an amazing spirit and connection to me that is undeniable. All five are part of our family and we love them as such. Non-pet people may laugh at us, but there are many more of us who would not. May your pup feel good and have many, many happy days of walking and sky gazing with you!

You are correct, Carmi. A pet really does become an integral part of the family. They add so much to our lives. And especially when the feelings of children are involved. I am hopeful that your puppy will heal and become stronger. This will make everyone feel more at ease.

I think he does know what is going on.. I definitely know you are learning about yourselves and what you can endure while going thru this.. My terrier knew what was happening to her and she was 14.. She taught me a lot about myself.. She taught me to make a decision that I never ever had to do... and I came out of it ok... My heart feels for what you and your family are going through.. Animals are so unconditional its amazing.. He's not himself and I can certainly understand that.. New routine, meds he has never had to endure, also he feels the added attention as well as the anxiety and fear... Not saying its bad, just saying he understands...and he definitely feels the love. ((HUGS))

These other commenters have said it all so well. So I'll just say:
- the cloud pic is beautiful.
- while it's not true that every cloud has a silver lining, you as a family are being brought even closer in dealing with this
- my heart goes out to your kids

1 Peter Chapter 1 talks about the heaviness that we feel in our trials. When I read that the other day the heaviness became hope; hope that I would grow through my trial and be better because of it. I've read the words of love and kindness that you and your family show to one of God's creatures. I see that love as the silver lining, the hope, the positive outlook.

He is a dog. But not just a dog, he's your dog and an important part of your family. And him being sick is no laughing matter.

"Perhaps impossible-to-forsee goodness can indeed emerge from the darkness. The only way to know is to keep looking for it."

Looking for it with you.

I lived with a diabetic dog for quite a long time. The diabetes caused her to lose her sight and eventually it caught up with her, but she carried on in her happy doggy way, enjoying life as best she could. She will never be forgotten, her picture hangs on my wall,