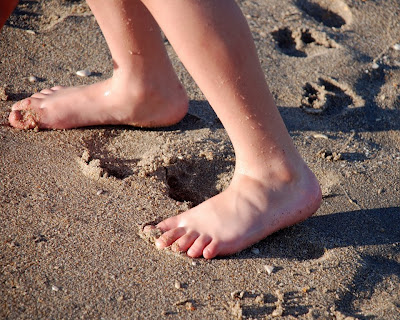 Leaving his mark
Deerfield Beach, December 2008
Click here for more Thematic "family"
We often say our youngest, Noah, has puppy feet because they seem too big for the rest of him. Lately that's become somewhat less pronounced as the rest of him begins to catch up with his big, stinky, oh-so-squeezable feet.
He only moves at one speed, warp, so when he plays all you see is a blur if you focus on his feet. But every once in a while, he slows down just enough to be captured. In this frame, he was grabbing the last of the late-afternoon rays before we packed everything up and headed home. By the time I took this shot, we had given him at least a half-dozen five-minute warnings, and he was still nowhere near done. When we hit the beach, he knows our time there is limited and precious. So he makes the most out of it.
Watching him on this day, so did I.
Your turn: How do you make the most out of limited time in special places?
Posted by carmilevy at 6/10/2011 06:20:00 AM

My son is very much the same about the beach... or as he sees it, the world's greatest sand box.

I make the most of precious moments by mindfully enjoying them and taking lots of photos to remember them by.