My heart bleeds for you

I woke up early this morning to the sound of a ringing cell phone - one of the risks of being a media nerd, I guess. The big news of the day is a scary one: researchers have discovered a security vulnerability that could affect upwards of two-thirds of all web sites currently online. It's called the Heartbleed Vulnerability, and it means these sites may have made it relatively easy for complete strangers - hackers and curious, tech-savvy children alike - to "scrape" websites and obtain personal information, up to and including usernames and passwords.

I chatted with CBC News Network's Heather Hiscox via Skype and NewsTalk 1010's John Moore to explain what it means. And what it means is this: IF (a deliberately big IF) a hacker or curious tech-savvy child manages to exploit vulnerability, he/she/it could subsequently log in as you and have all sorts of fun on your behalf. So before you do anything, change your passwords.

Now, Chicken Little isn't running screaming through the town square, and there is no reason for mass panic. It's a vulnerability, a latent weakness that some computer scientists happened to stumble upon. The affected web site owners are already aware of the issue, a fix has been made available, and everyone is busy patching things up so that this security hole will no longer remain open. There is no evidence that squillions of people were actually victimized. This is all potential.

But it's always a given that something this high-profile, this widespread and this potentially insidious will get some big headlines. And that's what we're seeing now. So for now, change your passwords, watch for updates from the major websites that you deal with - for email, banking, healthcare, government, etc. - that confirms they've fixed things on their end, and go on with your lives. The world will indeed continue to spin about its axis.

Your turn: Freaked? Not? Are we getting tired of the never-ending stream of online risks and security breaches?

It was a busy day in techland thanks to this story. I wrote this article for Yahoo Canada:

And this one for Bell Media's TheLoop.ca:


Heartbleed - the 2 things you must do now to protect yourself

I did a bunch of interviews to support this story. In no particular order, here they are: 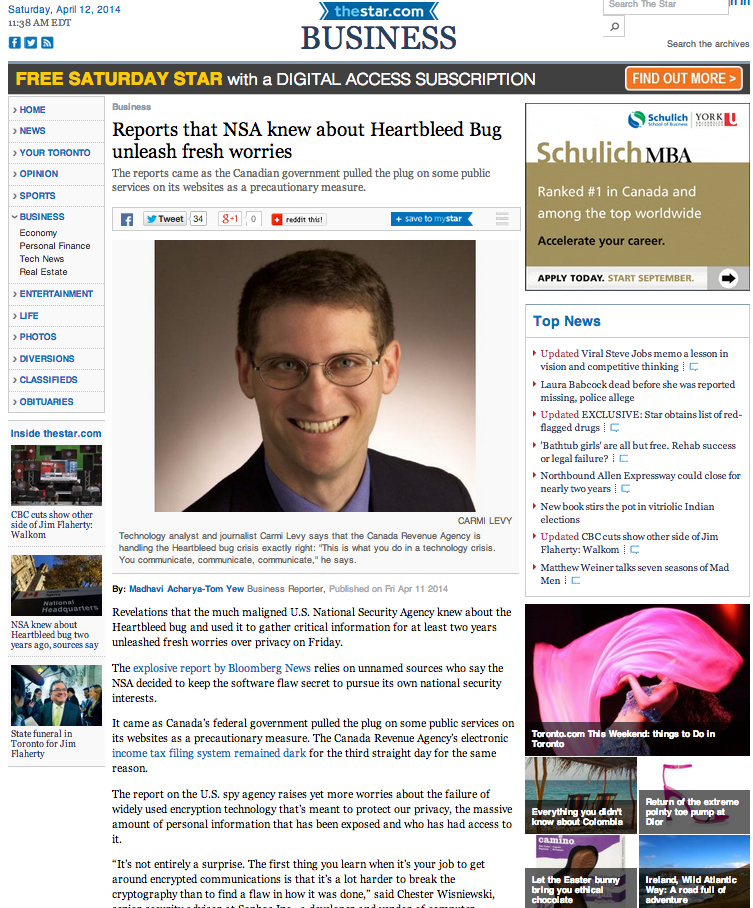 I also did a series of interviews with the CBC Radio Syndication unit, including
Update - Friday:
Related links:

I want to check to see if the apartment manager got my rent check, since I'm out of town and it wasn't cashed as of Monday. But I don't want to log onto online banking for a couple days (or so I have read).

Thanks for the FYI. You are my go to source for this stuff! Seriously.

A calm techie ship in a password storm. Thanks for the info, Carmi

We were forced to go digital.

Now we are paying prices that were not part of the sales routine the whole world endured over the past 20 years.

IT has changed our world, our lives for the better. . . AND for the worse.