Puppies don't get sick, do they? 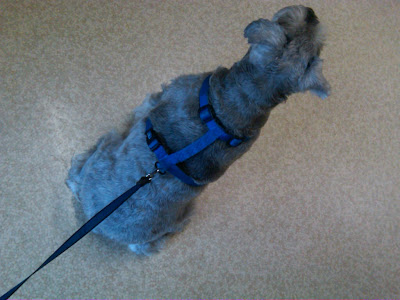 Apparently, they do.
Some of you may have read about our dog, Frasier. He's a miniature schnauzer who we rescued a few years back (see here for his first entry, here for second, and here for everything else), and is about to celebrate his fifth birthday.
He wasn't feeling so well last week, which in and of itself wasn't alarming. After all, he's quite the inventive garbage-eater, always figuring out a way to sneak past the ever-evolving and multiple layers of babyproofing we've thrown up around the house. Sometimes as a result of his exploits, he'd spend a few days with the doggie equivalent of a boo-boo tummy. He'd lie low, give us his pathetic look, and eventually just bounce back.
Well, this time he didn't just get better. He was drinking voraciously. He wasn't himself. We knew.
The vet confirmed it this weekend: furball has diabetes. Which means we've begun to inject him with insulin, and our schedule now becomes a little - okay, a lot - more involved as we time his shots, meals and snacks around his twice-daily dates with a needle.
We've been through this before - our cat became diabetic a few months before we lost him. But he was older, and you sort of expect stuff to happen to an older pet. Frasier's still a pup, still has years ahead of him. We weren't ready for this vibrant dog to suddenly turn into a sick dog.
But that's the thing about life: You just don't know what it'll throw at you. You can be fine one day and sick the next. Or not here at all. It applies just as much to animals as it does to humans. It's never predictable. It never has anything to do with how nice or not nice you've been. It's never fair.
But it is reality. And part of me feels like fate has let this sweet thing down, like we rescued him from an abusive home only to have this - this - happen to him. But see my previous paragraph: We don't control what happens to us, or to our dogs. We only control what we do next.
Harsh as it may seem, it is something we will deal with as a family. I'm already using every alarm and timer on my Timex Ironman Triathlon watch to track every event during his now tightly-scheduled day. I'm always following him through the house to make sure he's not getting himself into trouble. I know where the honey is in the pantry in case he becomes unresponsive and needs us to force-feed it to him. I'm learning how to hide my own fears whenever we discuss his health with the kids, how to share everything we can with them without scaring them in the process.
Unfortunately, they know what it's like to lose both pets and people. They understand how chronic illness can paint the tone of a family, can color its days and add an invisible weight to everything we say and do. They've grown up with it, so this is almost old hat to them. I think I'm worrying for nothing. And I wish they could worry about other things, instead.
But here's the thing: For as long as we have him - a day, a year, a decade, whatever it is - he's their dog, their unconditional best friend. And while he may seem a little fragile as he gets used to his new reality, he's still the very center of their world, still the loud-mouthed dog who howls at everyone he meets and jumps all over anyone who'll let him. Noah gave him a hug as he got out of the shower and headed to his room for tuck-in. He lingered over his ears for a little longer than usual, giving each one a kiss before he wandered off. He spoke to him as he always does, gently. And the dog looked at him as he always does, gently.
Nothing had changed. At least not the things that mattered to them. Maybe that's what we'll focus on in the weeks ahead as we get used to the next chapter in this dog's life.
Your turn: Got any words for Frasier?
Posted by carmilevy at 6/20/2011 06:29:00 AM

At least you don't have to check his blood twice a day. From one diabetic to another, insulin is manageable. I take drugs for my type 2.

It's all relative. Maintaining a good routine always works for me and I am sure for Frasier with all of you watching him.

What a very familiar thing. A few years ago, we had our not-quite-2 year old dog fall suddenly ill. We didn`t figure out what was wrong fast enough, and he passed away. Mark`s written pretty extensively about him.

Recently, Mark`s nephew was diagnosed with type 1 diabetes also, so we can relate on all counts!

I`ll be sending lots of thoughts for your family and your pup as you guys navigate these new waters.

I'm sorry to hear about Frasier. We also lost our cat to diabetes, however my MIL had a dog the same breed as Frasier, who also had diabetes, and she lived for many years. I think maybe a dog's system isn't as delicate as a cat's.

Sending my best wishes to Frasier and his treatment. Also, to you and your family for time it will take to keep him healthy. Animals are our family and we have to do our best for them and I know you and yours will certainly do the best for Frasier.

I will share, with you and your readers, my own moment of puppy illness. Theo was only 1 when diagnosed with discal hernia problems, and blogged about it here. Since then, I had to have him hospitalized for an MRI with the possibility of surgery following (last March). He is not a candidate for surgery (3 discs involved) but with a medication regimen, babying him (no jumping off stuff - he's too short to jump on - and stairs are in our arms), he's doing fine.

We do adjust. Our fur babies are our kids as well, and we would do as much - if not more - for our kids.

Sending hugs to Frasier from all of us, and a "paw bump" from Theo who says that he knows Frasier's doubly lucky because he is with your family. Another family who might have rescued him might not have wanted to handle his diabetes. You guys are amazing!

It's so heartbreaking when there's something wrong with your dog and you can't fix it.
The thing about dogs though is they have a wonderful way of putting humans to shame when life throws them a curve ball. If Frasier is anything like the dogs I know he will just trot right in to this new life chapter and continue to live and love day-to-day.
Dogs are so adaptable. Our German Shepherd spent the last year and a half of his life in a wheelchair due to a degenerative disease, and I don't think I ever met a happier dog.
Hugs for Frasier! He's lucky to have such a loving family.

Just think how he would suffer if he hadn't been adopted by you. You've given him a loving home.

Our previous dog, our malamute, suffered from a problem with his thyroid, and it was so sad to see him decline. Still, he was loved to the end.

I am so sorry to hear about your puppy. I have three dogs and our oldest ( she is 10) has numerous lumps and the vet has told us to " enjoy her while we can" that was two years ago... so you never know. and that is my advice to you ..." Enjoy him and love him.. because you may never know!

A big hug to Frasier, and one to your kids.
It's hard for everyone to deal with this. We've never had a dog with diabetes, but the most loving and light-hearted dog we've ever owned, Murray the golden Labrador/Shepherd cross, developed stomach cancer at the age of only 7. It was heartbreaking; he was operated on and seemed to be better for a time, but back it came. He got noticeably thinner and sadder until we had to make that awful decision.
I still miss him, several great dogs later. He could leap tall fences at a single bound, and always had a smile on his face.

You're right. It's never fair.

My words to him, is " keep on fighting Frasier and most of all show those two legged folks who love you that you can fight this'.... Carmi, even tho you have that watch set, I can imagine the anxiety, anticipation and the past memories you must be going through... This has got to be a test for all of you as well as some sign/symbol Frasier represents.

I know what sick pets mean. I have one on anti-thyroid medication and Daisy is treated for heart failure and 2nd degree heart block. Three pills twice a day, try to curb the running fits and checks on kidneys. Max had cancer... they all eventually get something.. as do we.

With my mom a diabetic.. I can say that the KEY is to avoid the sugar swings. When it goes too high.. it will inevitably swing too low. I found that if we could get a couple of snacks in (morning and afternoon) then have an extend protein bar before bed, we could avoid those 40 and 50's in the first morning that scare me (but don't seem to register with 80 year olds).

I'm sure he will adjust, as will your family.
"Frazier, stay out of those cookies... and don't try to hide the pastries under your bed!"