I took the kids to the playground this afternoon. Although the stated goal was for them to have fun and blow off some pent-up energy, I think the ultimate - and selfish, I admit - benefit was for me to reflect on their rapidly-changing lives.

As they happily danced from the slides to the swings to the climbing tower with the red gabled roof, I quietly sat on a nearby bench and tried to snap endless mental pictures so as not to forget precisely what I was feeling.

It was, after all, just yesterday (or at least it felt like it) that I snapped a (real) picture of a then-two-year-old Noah climbing the rope ladder all by himself. He refused any help, and I stood uselessly a few feet away, holding my hands in front of me just in case he stumbled backward. He didn't. So I grabbed my camera and snapped the scene.

Today, he clambered up that same rope without a second thought. He's four years-old now. He'll doubtless get even better at this particular skill until, someday, he'll decide the playground just isn't for him any more. I dread that day. I love watching him play. I love the innocence in his voice as he dances around the sand, as he chases his big sister up the ladder, then down the slide. I love the way he belly laughs as he serves me "ice cream" from the little nook beneath the climbing tower.

He's got a few years to go before he tires of this game. But this year is almost over. The late-afternoon sun was already setting as we prepared to head back to the house. We zipped up our jackets and buried our hands in our pockets to ward off the sudden chill in an absolutely clear day.

Just before we left the playground, I pointed our camera at the sand and tripped the shutter. Little footsteps brought into stark relief by a low-angled sun. A day ends. A season ends. I hope we have ample reasons to return in the coming years before unbridled childhood play gives way to the stresses of real life. 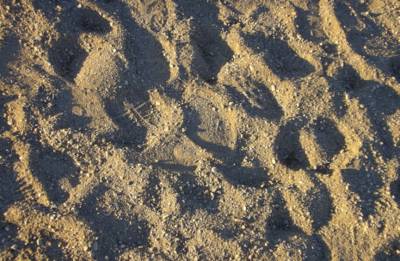 Don't we all remember with dread the day we stopped seeing the playground as an ice cream shop, a pirate ship, an alien city, or a lava pit?

The image of foot prints in sand are the perfect way to describe how times, seasons, and ages do not remain static. This story and the metaphor in the image are a perfect match.

This makes me pine for the days that my nephew was still a tyke. Now he's 22 and knows everything.

I love him now, of course, but oh how I loved his little boy self when he would play with abandon and knew that Aunt Joanie would be there to catch him if he fell.

How do you do that, Carmi? You perfectly capture the essence of the moment, combining your words like a musical director combines just the right instruments in just the right manner to create a masterpiece.

So you've just described my day today, only ours was at the local duck pond. The sun gleaming through the autumn leaves to touch the light in my daughter's hair, her eyes shining and dancing with joy, as we tumbled in the grass amongst quacks and wind and laughter. She's only two, but I look over at my four year old son, and know that I will blink and she'll be his age. I relish watching her grow up and blossom into the beautiful woman I know she will be, and yet...it's bittersweet...I just don't want to let go of each day, because tomorow, she will be a different person. And I love who she is right now. And I always do -- that's the connundrum, isn't it.

Some moments you just want to capture and live in their space forever. Thank you, Carmi, for your eloquence and poetry, to help us all do just that.

What a wonderfully original way of capturing those special moments! I think I'll do that with my children too, except my man-child's foot will look like a dinosaur on the beach!!

What a beautiful idea.

It's funny, but I just got back from visiting some friends in Ottawa and their son looks very much like your son. Deja vu.

Just beautiful, Carmi.
Thanks for sharing.

That was very beautifully written. I think that the growing up and out is one of the things people like about having dogs. With a dog, you always have that four year old. They never grow beyond that. Their joy being at the park is just as real when they are one vs when they are ten. Of course, there are puppy behaviors that they out grow, but they only out grow them to about the human age of three or four, and then they are magically stuck there for another ten years...or more if you're lucky.

Thanks, everyone. I am touched by your comments, and feel more motivated now than ever to continue to paint literary pictures of this type in future. Watch for more!

What can I say: you inspire me.