My photographic tour of the fruits that make us taller and stronger continues. I took the apple pic on the same trip as the orange pepper pic first seen in a post earlier this week. I was simply looking for color - indeed, any color that caught my eye - but didn't initially think green apples were really worth my time. The list specifically said Red Delicious, and my daughter helped me pick the best ones.

While we were busy discussing what made a good fruit and what made a stinker, little brother Noah was sitting quietly on the other end of the cart. He spotted the green apples next to the Red Delicious display and commenced the familiar chant of the 4-year-old: "I want..."

Normally, it would be some kind of more-sugar-than-cereal cereal. But this time, he was asking for green apples. And knowing how much our little guy likes them, I couldn't in good conscience say no to him when he was asking for...fruit! So we rolled the cart a couple of feet over and I repeated the scene with both of them.

As we picked and judged, their greenness jumped out at me and I knew a picture was brewing. So when we had filled the bag and carefully tucked it into the far end of the cart - to avoid bruising, y'know - I did the photographic two-step and snapped off some views of the apples that didn't quite make the cut.

Unlike the now-lost buildings I failed to shoot earlier this week, I know apples will always be abundant at the supermarket. So it's not like I wouldn't have been able to get a similar picture on any other day.

But that moment, when my kids and I first explored for the perfect red and green apples, was unique. I'm glad I recorded it with my camera and my pen. 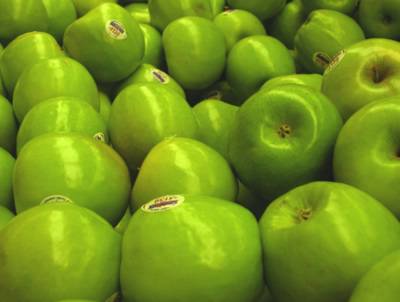 With apologies, and thanks, to Wheelson for coining the term that graces this post.

Lucky dad you are to have kids that crave health food!

Your pictures capture the true beauty of nature.

Love the photo! Something like that...framed, would look awesome in my kitchen!

But I have to ask.....how did the grocery store allow you take the photo? I've tried before....but I've always been spotted and told that "photo's were not allowed".

Good getting to know you.

Great looking apples. Lucky you to have such healthy kids.

Cool pic Carmi. Apples always remind me of an orchard we used to sneak into when we were kids back home in Nova Scotia. Brings back good memories, Thanks!

Thanks for your comments, everyone. You make me want to head out with my camera right now. Except it's night, and it's cold, and I really don't want to go outside till tomorrow! But I digress...

To clarify, my grocery store shoots are done entirely below the radar. I do not seek - nor have I ever received - advance permission to do so. I try to take the pictures quickly and get the camera back in my pocket before any staff members spot me. Thus far, the few who have "caught" me have simply smiled and moved on. But I suspect it's only a matter of time before one of them plays the heavy and takes me to task for my escapades.

I think the fear of getting caught is what makes it so much fun. I have to conceptualize, compose, and execute in virtually no time at all. Our kids think it's the funniest thing, and we always have something cool to talk about afterward.

Another great picture, as always, Carmi!

I used to have a job where our boss "requested" that we take pictures in stores...it was totally wierd. We were taking pictures of our own product on the store's shelves, but we couldn't get permission before hand because we wanted to see how they really kept our section. Tidy, messy, completely unorganized...whatever. So we had to go in and snap off these shots real fast and high tail it out of there. And we got caught so many times that we had to start wearing disguises. You think our boss would have invested in sneakier photography equipment.