As a followup to my earlier description of my cow fixation, I have managed to find the picture (the picture, that is) that I took of the cows near my home. Like the leaf photo I posted earlier this week, I snapped this scene during one of my bike-photo rides. I figure these lovely animals were wondering why the heck a guy on a pink bike was parking along their fence and sticking his lens in their face. They just started at me as I snapped away. They were so cute!

Ironically, it was in the same general area as the leaf picture. These cows, like so many of my subjects, have a story.

They live on a farm that used to be on a sleepy regional highway just northwest of town. Then one day, some construction workers rolled into town and turned the fields across the street into a Wal-Mart. Before long, a bunch of other big box stores popped up in front of the Wal-Mart, and the neighbourhood was sleepy no more.

Our bovine friends watched as the road was expanded and traffic levels increased to urban levels. A year later, the construction crews returned - this time to the cows' side of the street, basically to the left of this photo - and put up a Sam's Club (yup, Wal-Mart wants BOTH sides of the street, it would seem). Traffic increased yet again as the area continued to be paved over - or is that under?

Fast-forward to today and little has changed. The cows are still there, living as they do mere metres away from zooming traffic. But the ominous zoning change sign has gone up in front of the farm.

The last time we were in the area, our kids waved excitedly at the cows, enthralled that they could experience a real farm so close to home. I paused and tried to record their reactions in the deepest recesses of my mind, for I feared moments like this would soon vanish from my family's reality. It is almost a foregone conclusion that pretty soon the farm will exist only in our dimming memories. This, apparently, is called progress. 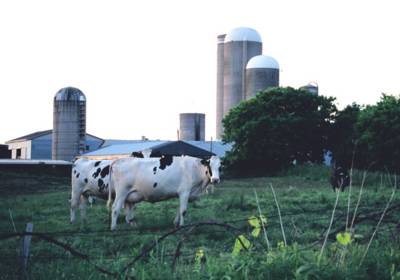 Yes, it's a shame how nature is pushed to the out skirts of our day to day lives. We have been looking for a home/hobby farm that is close enough to everything so as to not isolate ourselves and the children, yet far enough from the zooming traffic. Unfortunately it's getting harder and harder to come by in our neck of the woods too.

On a lighter note, I love the cow shots. I have a large dog (Newfoundland), because of both her size and colour, I sometimes call her a little cow (usually after she has 'played' with one of my plants)!

Holsteins (the breed in the photo) are beautifully photogenic. We used to have several (milk cows) and one in particular, would be grazing along the side of the road, tied to the fence, when tourists would come out of their cars, and take their photo with her (completely friendly). Inevitably, her poopy side would be showing (the side she lays on), but so many people now have pictures of our beloved Honeysuckle, it's quite cool.

Thankfully, the farm we lived on is still a farm, still in the middle of the hilly countryside.

The farms my dad grew up with in Abbotsford and Sumas Prairie, are all gone. The historic house my Grandpa Charlie (great Grandpa) grew up in, was on a huge farm, but now sits, protected by its age, on a grassy knoll by the freeway. All the property around it has been bought and much newer houses and condos have been built.

My dad always showed us this place he played as a kid, this huge rock they played on. Just a rock, about 12 or 14 feet high, but one visit, it was gone, and replaced by a road. Like it was unimportant.