We had our first significant snow of the season yesterday. We went to sleep with big, fat flakes dancing in the dark skies, and woke up to impossibly soft fluffs of white perched on top of every vertical and near-vertical surface imaginable.

So I did what any OCD-suffering writer does: I dropped the digicam into my knapsack and headed off to the office. Along the way, I captured whatever caught my eye. Interrestingly, this picture is the least "snowy" of the few dozen that I took. But there's something about the s-curve of the bike path that makes this one burn in my brain.

It's a lovely summer-meets-winter message, and as I stood there drinking in the snow-induced silence of the scene, I half-expected someone on a bike to emerge from the top of the frame and ask me if I wanted my own picture taken. It didn't happen, and likely won't until spring. But it reinforces the notion that you never know who or what you'll encounter on these adventurous paths. And a new discovery often lies just around the furthest bend. 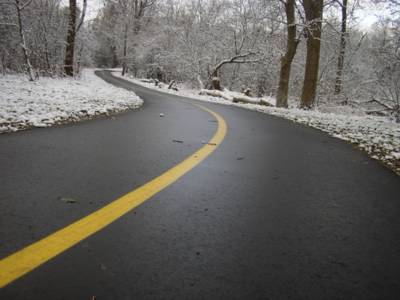 Incidentally, all the snow had melted by evening, and the scenes of that wintry, white-painted morning faded back into our collective memory.
Posted by carmilevy at 11/10/2004 07:30:00 AM

I agree, that s is sweet.

I like the sheen on the path. I think, if this were mine, I'd crop it tighter at the top and put the upper bend of the s closer to the corner.

The thing that has always amazed me (for more than 20 years now) is that when I start looking around with a camera, I see things differently. It's wonderful.

nice picture, I sometimes miss the snow (I live in Vancouver and it never stays on the ground, I suppose i could go to the mountains though). I can almost see that biker, by the way. Nice imagery!

Dean: It's funny you mention the cropping potential. I'm always watching for the opportunity to crop. I don't believe in having anything extraneous in an image, and as such find myself shooting digital pictures with a touch of a buffer to allow for future cutting. This time out, I thought of cropping, then dismissed it because I wanted to get my breakfast and get out the door. Next time I photoblog, I'll move a little more slowly :)

Terry: Snow is very romantic the first couple of times it falls. By the middle of winter, however, it tends to lose its appeal. Yesterday's experience - gorgeous in the morning, gone by evening - was absolutely ideal.

Nothing like the first snow of the year. We don't usually get ours till January, I am jealous now, but come February, you can have it all back...

What a beautiful scene. I live in Minnesota and am actually looking forward to snow; however, like you mentioned, once it is hear it gets to be so brown and slushy that spring is a welcome event!

Snow...snow...I think I know what you're talking about. White and cold, right? I can count on my hands the number of times I've been in snow; on just one hand the times I've been out while its snowing. Such is life in Sunny California.

Your picture is compelling, drawing me to walk the lane and just stretch my neck to see what's around the bend. Urging me onward to explore. Very effective. Just like your writing.

Oh yes, lovely .... I am jealous. I want snow! We should have it by now, and I can hardly contain myself in anticipation of the first big snowfall that shuts the city down!

Lovely photo and great thoughts... maybe something is waiting around the bend.
Great stuff, Carmi.