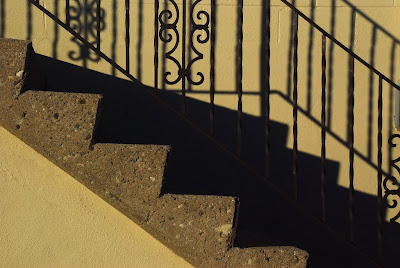 About this photo: Thematic Photographic explores shadows this week. If you'd like to explore them, too, we invite you to follow your mouse here. It won't hurt.

Beginnings and endings seem to mean more to the average person than everything that comes in the middle. We remember what we were thinking and feeling when something first appeared or when it left us. We anticipate the impending arrival of whatever it is, worry about the void it'll create just before we lose, then lament its loss after it's gone for good.

Middles, on the other hand? Not so much. Lunchtime, for example, kind of comes and goes, a mid-day break that, if we mark it at all, we usually do so with rushed indifference before getting back to whatever we were doing beforehand.

I'd postulate that lives follow a similar path, often ignored until they're either over or almost over. But that would be maudlin for the middle of a long weekend, so I'll set it aside. For now.

As far as light is concerned, it's far more fun to play with first thing in the morning and last thing in the evening. They call it Golden Hour, that all-too-brief period when the sun's rays hit the planet at extreme angles. After being filtered obliquely through the atmosphere, it's usually rich with all sorts of warm yellows and oranges, all the better to paint the world in soft, memorable tones.

Which is why this staircase, typically not worth a second glance when beaten into a monochromatic flatness by the harsh midday sun, stopped me in my tracks as I walked past it. I couldn't get the shadows out of my head and couldn't stop wondering about the countless unseen people who have climbed and descended these steps.

As I put my camera back in its bag and continued on my quest to fetch little people from faraway and bring them home, I promised myself I'd try to get out around sunset more often.

I'm learning (again) about the value of "middles" these days. I guess I've always known, because one of my favorite things to say is "If you spend all your energy worrying abotu what it might become you don't have any left to enjoy what it is".

But where photography is concerned, I'm right there with ya. I've found that the Golden Hour(s) are usually more like a quarter hour when the light is purely magical. This time of year especially.

The same thing happens with moonrise. Those rich golden or red moons are really only visible in the first few moments after the moon clears the horizon. And that sucker moves fast. (You don't really notice just how fast until you try to photograph it and then you find out that it won't stay in the frame where you put it!)

Happily, this time of year it's easier to get out at sunset and get what you're after. Other seasons you just have to work with the darkness.