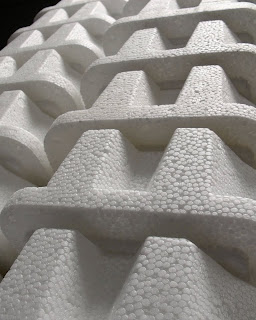 You get the strangest looks from people when you lean in for an artsy-looking photo of styrofoam. They think you're a little odd-kilter. They don't necessarily have to say it. The look in their eye, the raised eyebrow, the slight catch in their voice: Yup, they clearly think you're weird.

Which is fine, because you wouldn't want to pass up an opportunity to entertain them. Life's too short to spend it sitting quietly within the crowd. Sometimes, you've got to get up and stretch your legs, even if it means getting some stares along the way.

This picture makes me more than a little sad. We've reached a point in our evolution as a species that we give no thought to what it takes to move stuff from one side of the planet to the other. We think we're technological wizards for merely having that ability, for being able to build supply chains that get the highest quality goods to our doorstep at the lowest possible price.

We don't think too much about the resources required to make all this happen. And as I stared at this styrofoam - which, in my neck of the woods, isn't recyclable, and probably demanded some seriously noxious materials and processes during its manufacture - I wondered if we'd ever return to the day when things were made close to home, and it didn't take a PhD in chemical engineering to get it to your doorstep unbroken.

Somewhere along the way, I fear we lost the script.

Your turn: Did we? Is cheaply made stuff from China going to kill our planet?

One more thing: It's not too late to share your black & white vision as part of this week's Thematic. Just go here to participate. We promise you no styrofoam will be harmed in the process.
Posted by carmilevy at 11/16/2010 06:02:00 AM

Intersting photo...Love the way you look at your surroundings. Yes, packaging can put you on a guilt trip when you have to dispose of it. I despise the peanuts, they stick to everything.

Yes, to answer your question.. Technology is what happened.. and less thinking about the consequences of what would happen when certain conveniences were established... and yes, we will pay for it... Those plastic bags for groceries- I saw back in the early 70's in Paris.. not here, but Europe... look at the effects of 'fast food' places, plastic water bottles, etc... yep, the planet will be one big dumping ground.. I remember when the water in Maui was clear and not tainted...

I believe so. It is appalling where packaging has gone. Not just the shipping of materials, but the packaging for sale also. Why is a 3 inch long 1/2 inch wide multitool packaged in a 6 inch by 4 inch plastic clear package?
I work closely with our shipping and receiving department, they make a habit of recycling packaging whenever possible. The annoyance with styrofoam is that it is usually made to fit a specific item so it makes it difficult to use again.
However the main problem is that better solutions are offered these days and still are not used much. Biodegradable peanuts are just as good as the polystyrene peanuts, but are plant based, not petroleum based, so they will dissolve and get eaten by bacteria. One company that I know of, Puffy Stuff, offers to make to fit biodegradable packaging.
Air bags are another alternative though not as good for the environment as the plant based peanuts. They are sealed big full of air that after use you can cut open and release the air to create a very small waste profile. It would be nice if the companies that make this kind of packaging actually describe the best way to dispose of them on the outside of the bags.
Corporations need to take the initiative to use these products that are better for then environment, until they do we are chancing becoming the planet portrayed on "Wall E".

it is the really expensive stuff made in China that I will be concerned about.

isnt there an *island of trash* in the middle of the Pacific? i think i saw something about that somewhere, or i just made it up, but i am pretty sure i did not make that up...

gasoline is a perfect example...want it cheap, so we drill in the ocean, and then have a major boo-boo like the bp thing...

prolly would not have happened if we didn't need cheap...

I wonder, too, what will happen to all our dead electronics. I image them morphing into some strange permeation of themselves ...

Apparently I have raised a Chemical Engineer (at least that is what he is studying at the university) so perhaps he will be one of the people working to solve the problem.

Stryofoam is incredibly polluting, and unneccesary - I have seen moulded packaging made from pupled and recycled paper which does the same job in a much more environmentally friendly way.
We have bags and bags of styrofoam peanuts around here which I don't want to send to landfill, but don't know what else to do with.