What would have been 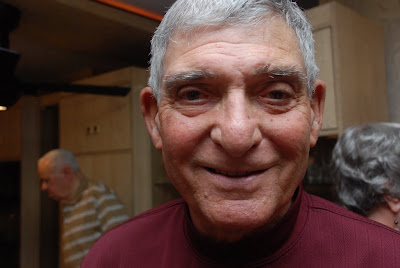 My father would have been 76 today. In the little-over-a-year since we lost him, I've wrestled with how I should mark the various milestones that have come and gone in his absence. Birthdays, anniversaries, whatever they are, the calendar has a nasty habit of serving up bitterness just when you thought you could handle the memories.

Well, I'm learning that there is no "should", no pat schedule that governs how we are expected to mark these events, no rules that determine whether or not it's acceptable to post a photo or even mark the day at all. So in the absence of a defined framework, I've simply decided to do what feels right to me. And sharing this specific photo feels right.

Why this one? I could have chosen any picture from the few months leading up to last September. But there's something in this one that all the others lack. It's likely the final picture of him where he looks...like himself. Not sick, not tired, not resigned to whatever comes next. No, here, at this moment, he was dressed nattily, his usual sharp-looking self, holding court with a crowd of people gathered at a party, because no one worked a crowd as well as he did.

What I remember from that night was his voice was strong, his eyes were sparkling, his spirit was intact. He bantered with me as I shoved the camera in his face, as I had done so often throughout our shared life. He was my dad as I had always known him, and for once I didn't have to play with the camera to shield what years of sickness had done to him.

it is a great picture and you look very much like him....sending love Carmi .

I found this post to be just perfect in it's simplicity...
Beautiful wods to match a beautiful photo...
Strength to you...

What a beautiful post... and a wonderful photo of your late father. I can see the similarities between the two of you.
I lost my mother over 22 years ago. I was 13, she was just 34. I think of her often...
In fact I've just written a short post about 1st November, a day in Portugal when we remember our loved ones that have passed on (on blogspot). I've also put a lovely old pic of my family (with my mother) on my wordpress blog.
Great blog you have here!

I agree with the other readers, you can see similarities between you and your dad.

Your photo and post remind me of the quote McCurry uses, ”My father didn’t tell me how to live; he lived, and let me
watch him do it.”

His eyes are so inviting and gentle, that is what I see and as what someone else has said, u bear a likeness to him... Was he a writer as well?

That's so beautiful...you can't miss it- in the eyes: trust, knowledge, Love, good humour..I can only imagine how much you miss him...

Everyone who has lost someone marks the milestones in different ways, I'm certain. Some visit the cemetery if possible, others do something in the person's honour, some sit solemly and simply think about their loved one, others smile through their tears, some write a blog post or poem, and others simply whisper: "Miss you. Love you."

I understand why this picture, it captures him well, you can tell the man he is in this picture. I have a picture of my dad like that, it just sums him up well. Me and Mrs send our love to your family, thank you for sharing and such touching words, I think you honor your dad well here.

I see kindness, gentleness and a wonder sense of fun in those eyes. I think the best way to mark the milestones is whatever feels right, and that's different for different people.

Thanks for sharing your Dad with us.

It is such a beautiful picture to share....and oh my gosh what a happy expression to share with us and to carry throughout our day...happiness, pleasure....and you and your son resemble him so much! ...I agree it's better to let the day or past event take fold once it's arrived and you allow the emotions fitting and from your heart to carry you through it. Thanks for sharing your Dad!

Carmi, I've sent you this link before in a private email, but perhaps your readers would like to know about it too. It also has to do with a son who loved his father...

Everybody else has said it all so well.
I know very well how hard those anniversaries are... I hope you are gaining strength from the affection and compassion which are evident in all of these posts.

it is better to have a good picture of happiness as a reminder...he looked like he was having a blast.

my father passed over ten years ago...it does get easier, but yoiu always have the reminders...

as the years pass i find the reminders become more and more of the happy times and less and less of the sad...

Carmi - one thing I learned from my mom's passing (22 years ago) is that there is no right and no wrong way to progress. My sister, two brothers and I lived 4 different time lines from the experience.
Do what is right for you, and share what you want here on the blog - that's what it's for.
P.S. - love the picture, your dad's face is expressive and inviting.

A perfect tribute to your dad. We've struggled the same way with the passing of both my parents and my wife's mom. So difficult to mark the passing of those big days of remembrance in ways that feel "right". Looks like you chose the perfect way...just showing the man you loved.

An amazing picture of him. I think that you should continue to honor this day as his. It is right.

This is a wonderful tribute to your dad Carmi.

Wow, you look so much like your dad.
I've watched a friend wrestle with some of these same issues, and I'm working on a post about it.