Sitting by the dock of the bay 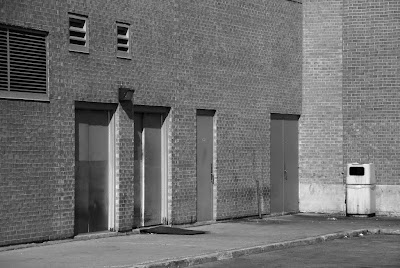 About this photo: Thematic Photographic celebrates black and white week. You can, too, simply by heading here.

Rules and photography don't exactly mix, at least as far as I'm concerned. There's a certain conventional wisdom among the point-and-shoot set that dictates the kinds of pictures that are and are not generally taken. Conventional wisdom subsequently results in conventional outcomes: Groups of folks staring at and smiling at the camera, head-on perspectives of famous buildings, the kind of things that ensure Cousin Sid's slide show will have us asleep within four minutes.

Don't get me wrong: There's plenty of opportunity for the smiling groups and the big, tall, iconic buildings, the birthday cakes and the pre-prom corsage pictures. But there's got to me more, too, because otherwise there are entire swaths of the planet that are completely ignored.

As an example, I'd like to present this loading dock at the back of a local mall. Shoppers don't give it a second thought as they rush inside in rapt anticipation of a new sweater that's more wanted than needed. Which likely explains why I'm drawn to it. Because it explains the background that makes the foreground possible. Because if I don't tell its story, no one will. That and I have no interest in telling the same story as everyone else.

And love this shot! Great perspective! A sense of discarded loneliness pervades here!

First, I really enjoy this photo.

Second, my pop always had an eye for that which no one else sees. (He would also like this photo of your.) He taught me always to notice what goes unnoticed... I think he said this because it helps you learn, it helps you appreciate everything in life... it pushes you creatively...

Wonderful to think of scenes like this and what happens here when we are not looking.

love your photos and your thought behind them as well as the unique quality. thank you for sharing

a thoughtful and thought-provoking post - as a learner would-be photographer, I do tend to go for the obvious...

I find this shot sad, depressing - GT's line "a sense of discarded loneliness" sums it up perfectly!

monocrome makes this pic more forlorn than reality, but it is bleak and it really works for your post...

as a guy that often has to approach the mall form the loading dock area, this pic is not a new scene

as usual you have take a mundane shot and made it work...

what rules ???
I take pictures of things that tickle my fancy, never thinking of rules , but then again it might just be because i'm a complete amateur LOL

all the pictures i take are so amateur. If there were rules I would get an f..

Now that is a clean loading dock..... not many of these around.

Carmi, I liked your story in your post today! And I like the idea of breaking rules of photography and also of shooting the background versus the main story. You are so smart! Take care...

Rules, there are rules? My first reaction to your photo was, "No Snow, lucky you!" I understand exactly what you are saying, and my hubby has always been so angry with me when we go somewhere and I take shots with no people in them....he hates that...but some things or places just need to be captured.

I understand what you are talking about and I agree with your approach! Lovely picture by the way!
Shados and line and simplicity!

Carmi- you see with your eyes, what my mind does with words..the un-noticed, un-said, un-remarked upon person, place or thing..

There is so much to be said for that loading dock.. how many workers have smoked a cigarette, told a joke, wept a tear, ate a sandwich leaning against those doors..

Yes, I see that you really do see..Life..