Off to the penalty box 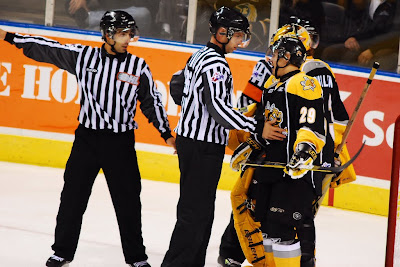 You may be surprised to learn that London has a hockey team, the Knights. They play in the Ontario Hockey League - not exactly the big leagues, but it's something we see more as an advantage than anything else.

See, we're a small-ish town, so we'll never have our own major league team. We get that. But it's that smallness that seems to play to our advantage. Games here are still affordable for the average family (vs. a four-figure night for the average Toronto Maple Losers fan) and sitting in the stands still feels like you're part of a community instead of a slick, marketing-driven, moneymaking machine. It filters down to the ice, too, as the players, still working their way up through the hockey hierarchy, haven't become megabuck, megawatt stars. 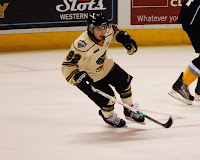 Erlich, #92, who plays centre. He visited our kids' school last year as part of the team's community outreach efforts, and they've been avidly following his progress ever since. He's being billeted by a family we know in the community, and he's been a regular guest on a radio morning show. He isn't a superstar - yet - but he's already the kind of person, a good soul with a tremendous work ethic, that my kids want to emulate.

So when we attended a recent game, I followed him with my camera for a bit because I knew the kids would love to have a picture or two of their favorite player. I've long been critical of how sports has tainted our definition of hero, but a hometown team like the Knights, with good kids like Erlich on the roster, is enough to soften my formerly curmudgeonly attitude.

Maybe he can teach the Maple Losers a thing or two about good sportsmanship, too.

It can only return if the players are genuine and know the importance of why they are playing..that its a privilege and not a right...

Or when the fans remember that the players would be, literally, nobody without them and start refusing to pay anything for an autograph and 3 figure prices for seats. I remember a time when sports figures were honored to give their fans an autograph, and were just happy making a decent, not obscene, living doing something they loved.
If the groveling masses would just stop going, they'd get humble real quick again.

@Max: that not only goes for sports but for celebrities... singers, artists, corporations...

I must agree that I so understand local sports and am so turned off by big business sports! Lucky you~

i know nothing about sports except that i am very bad at them.

i love hockey and i am blessed to not only have the BEST hockey club in the world (Detroit REDWINGS!!!!) 2 hours away...if you follow hockey at all the Illitch family has been very good to the guys that play for them...

also i am blessed to have their top farm club the GR Griffins....only 15 minutes from my house... and cheap tickets on the glass at the goal ends are only 30 bucks... other tix can be had for 13 and sometimes 10...

actually i was watching the GRIFSS!!!! last night on the glass to the right of the goal...it was AWESOME!!!

sports will always be a business..
it will never get back to the affordable way it was...

Kbf is right it is a priviledge but there are so few players that really understand that...

KBF How true. Our "entertainers" have forgotten that without their fans they are nothing. Will it ever change? bruce is right, it never will. Unless the general public wises up and stops throwing their money at the people. Very unlikely.

I have found that minor league teams are great for communities. I used to be the President of the Booster Club for a local team, and I loved those guys. They were personable, and they played hard while trying to move up to the majors. You're right about the atmosphere being much more of a friendly environment.

Recently, I posted about the late actor Steve McQueen quietly visiting The Boys Republic--a reform school that Steve credited with turning his life around. Like the hockey player you mentioned with a heart, Steve was not into photo-ops. Rather, he visited the boys dormitory all day long and listened to many stories and shared from his own life. Iam glad to read about this amazing sports pro who takes the time to give back! :)

Local junior c games entertain a lot of people. Every Tuesday night we attend the local Junior C game...sometimes we venture a little further down the road when the games are in nearby Amherstview. It does give you a community feel. We just started doing this three years ago and last year we went to Ottawa to see our first NHL game on Jan 2...we ended up going to a playoff game...it was so exciting even though we were in the nosebleed section...still can't watch hockey on tv but love watching it in person.