Who watches the sunset? 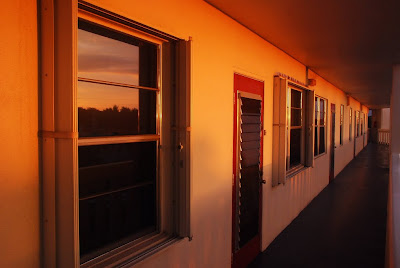 About this photo: It's Thematic's windows week, and we're focusing our lenses on windows of all kinds. Please click here if you'd like to share in the fun.

Disclosure: This is the development where my in-laws spend their winters. It's known as Century Village East (wiki), and at various times, many of their generation have made this place their winter home.

When we visit, I like to walk the grounds and drink it in. Not because it's great architecture. It isn't. Imagine 1970s-era concrete repeated, almost identically, thousands of times over. It was cheap to build at the time - Red Buttons, who was the development's advertising spokerperson back in the day, would doubtless agree - but it can be overwhelming to the senses, a sad comment on the victory of economics over common sense and basic humanity. A little creativity could have made places like this so much more than what they ultimately became. Oh well, live and learn.

[My mother-in-law reads this. I am so going to get an earful next time we speak!]

Of course, there's beauty in everything if you look hard enough. When we're here, I like to take walks late in the day, when the golden hour sunlight bathes the typically drab concrete in somewhat softer tones. On this particular night, I had been standing here on one of the outdoor walkways for a while. I'm not entirely sure why: I tend to linger in places when I'm on vacation and don't have a clock dictating my every move.

I must have been there for 10 minutes when it dawned on me that I had been completely alone the entire time. No one came in or out. No one passed by on the street. Even the birds seemed to have stayed away.

I stared at the line of windows - I said at, not in...I'm no Peeping Tom, folks - and wondered if anyone was on the inside looking out. In all our time here, I had never seen a face in a window. This isn't a place that invites residents to just sit by a window and take in the scene outside. Which is a bit of a pity, because on this night the sunset was lovely.

Missed sunsets. Life's too short for too many of those.

Yes, I do watch sunsets. And, sunrises. As many as I can. They calm me and help me deal with all the up&downs in life. A sunrise promises a new day, and a sunset promises another day.

I don't watch them enough Carmi. Occasionally though, I'll be on the bus or walking home and I'll take a moment to admire the dance of brilliant colours in the sky before the sun quickly dips away. There is one particular sunset that left a huge impression on me - it was quite literally breathtaking. I am so glad to have taken a picture of it... I look at it often and remember everything and everyone being washed in a glorious palette of colours that night. Here it is :)

Beautiful light, a captured moment that seems so universal.

Opps! I forgot to include a link...here's my submission:
window light

Most definitely!. I also watch the sunrise... I love it when the dark starts to break, and I can see the first hint of light hit my neighbor's window, then it grows and as if in a time lapse it just bursts through.. Many of my decisions come from either watching a sunrise/sunset.

My house faces north east (and southwest, of course on the flip side). I catch a bit of sunrise and a tad of sunset nearly every day. Sometimes, a tad is so beautiful, it's enough. I loved this post!

This photo immediately brought to mind the motels we stayed in during car trips to Florida! Yes, the sunsets in Arizona are quite amazing. I was once on the telephone with a friend who lived 10 minutes away and she had me step outside to take in a sunset!