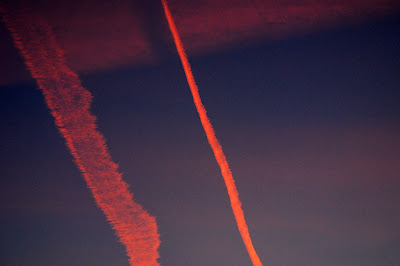 About this photo: We're doing the pair thing all week long. We hope you'll do the same by clicking here.

Most mornings, the first thing I do when I stumble bleary-eyed out of the house is stare at the sky. I don't think there's a defined reason for it: I just think it's a nice way to transition from the closed-in world of the house to the wide-open one that surrounds us. It's another one of my not-a-morning-person coping mechanisms, because if we're being brutally honest I'd prefer to hang around the house a little longer and pat the dog. Like I'm doing now.

My lack of morning acuity notwithstanding, there's always something neat going on in the atmosphere above, and sometimes it's even worth reaching for the camera - always close by - and remembering the moment. On this morning, it was the color that grabbed me first, that deep orange/salmon that only an early morning in a polluted part of the world can produce. But once my cones (or is it rods?) absorbed the otherworldly hue, I got to wondering about the long-gone planes that had left these parallel trails in the sky. Where were they now? Where were they headed? Who was on them and what was their story?

No clue, of course. Which is perhaps as it ought to be. Because in the end not everything needs an answer. And some things deserve to remain open-ended. Because that first-thing-in-the-morning moment, even for a wake-up-hater like me, is a great time to ponder the what-ifs of life.

Your turn: The first thing you do when you get out of the house in the morning is...?

Open the garage door! ha ha, guess that goes without saying right?! I always look back to view the perimeter (door closes no cats trailing behind)-and then like you forward into what ever Mother Nature has waiting....funny thing how this moment of the day is always reserved for the oohs and aahs of what will be.

Beautiful picture! Love the color of the jet trails.

I do the exact same thing. This morning it was 4:30 when I left...stars were brilliant.
Beautiful sky you captured.

And I thought I'm some kind of 'mental-freak' for doing such - looking up to the wide skies, every morning which most of the time so blue and clear and decorated with fluffy clouds and how it changes 'character' in nick of time!
I mean my neighbor did look at me with curiousity in his face ..haha
but now, since I knew somebody else find this as extra ordinary thing to do, so I don't have to be shy doing it openly anymore. ;)