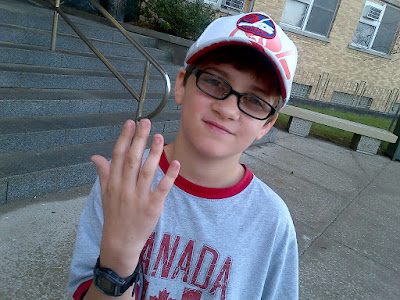 Little man had a big day at the hospital today. Just over a month after breaking his finger (see here), he got the all clear from his doc to leave the splints and buddy straps off for good.

As we said a thankful goodbye to the team that's cared so expertly and gently for him since his accident, he happily peeled the straps off of his finger for one last time. My wife crinkled her nose at the now-discolored, very frayed strips of fabric, then crinkled a little more when Noah asked her to hold onto them as a memento.

He's missed a bunch of activities, including his class ski trip and a skating outing, so he's already looking forward to getting back to the typically frenetic life of a busy young man. First up: curling.

We won't be wrapping him in bubble wrap or otherwise keeping him from doing the things he so very loves to do. He has such a delightful, touch-the-world spirit about him that it just won't do to hold him back for fear of injuring himself again. Bumps, bruises and even the occasional broken bone or two are all part of the game when you're growing up.

As perverse as it may sound, watching this sweet, focused boy go through this experience was one of those privileges of parenthood we won't soon forget. No one ever wants their kid to get hurt. But when the inevitable happened to him, he managed to teach us a thing or two about finding the joy in something most people would simply write off as a negative experience. I'm learning our son doesn't think or act like those mythical "most people", and that's an entirely good thing.

Welcome back to the land of the unbroken, little man.

Methinks the freshly unwrapped, fully digital Noah should be allowed to partake from the big communal popcorn bowl while watching a DVD with his family. Both hands. Aaarumph, chomp, chomp.

All I can say is that your kids are lucky. No parents are perfect, but from what I've seen here on your blog, you and their mom are doing a great job.
Bravo!

Time to hang from some monkey bars (or whatever they now call them now). At his age, I had my wrist in a splint for 6 weeks, and I was so very happy to be able to ride my bike again.
Go have fun!